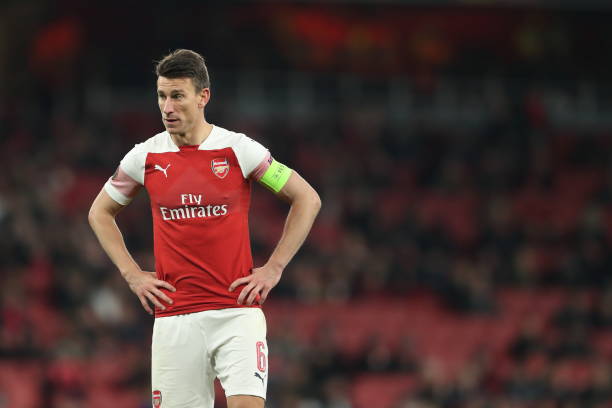 Arsenal captain Laurent Koscielny has refused to go with the rest of the squad to USA for their pre-season tour and the club has made this public via a statement released on the club’s official website.

This has come at unexpected time as Laurent Koscielny has over the years showed that he is a humble person and a proper Arsenal man but it looks like things are about to get messy for him in the eyes of the Arsenal supporters as him refusing to travel to USA with the rest of the squad shows that he wants to leave the Emirates Stadium this summer.

Laurent Koscielny has one more year on his current deal at Arsenal and there has in the last few days been reports which claims that the Frenchman had requested the gunners to terminate his contract so that he could leave on a free transfer. So here’s the statement that Arsenal released concerning Laurent Koscielny’s refusal to go to USA with his teammates.

“We are very disappointed by Laurent’s actions, which are against our clear instructions.” the statement read on Arsenal’s official website.

“We hope to resolve this matter and will not be providing any further comment at this time.”

POSSIBLE TRUTH ABOUT THIS SAGA

Laurent Koscielny has indeed been a great servant of Arsenal because he has been at the Emirates Stadium for atleast nine years but he too could understand that the club is under a financial crisis and can’t just let go of him for free when he still has one more year on his contract. Arsenal has done nothing wrong here as it will want to receive atleast a small fee in order to let go of the 33-year-old as that amount can still be used in important matters like completing the deal of Kieran Tierney.

Laurent Koscielny also isn’t that too wrong either as he obviously wants to go back to France which is his home as he can no longer handle the physicality of the Premier League but he however probably knows that  the clubs in France can’t pay a fee to sign him because of his age and injury history plus his wages. So it looks like he seriously wants out and him refusing to go to USA with the squad could be because the gunners have refused to let him go on a free transfer. Reports from France claim that Rennes and Bordeaux are interested in the Arsenal captain.