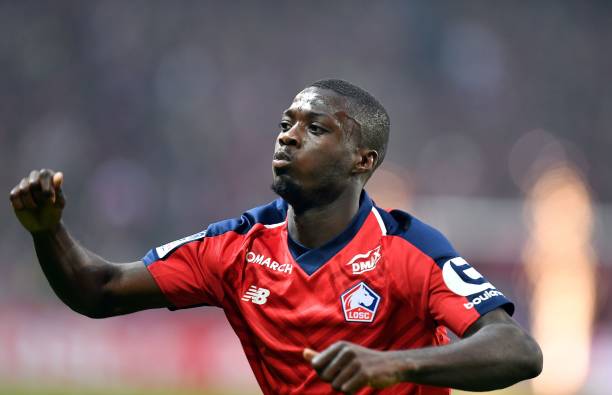 Nicolas Pepe have in the last two days been linked with a move to Arsenal and reports yesterday claimed that the gunners had reached an agreement with Lille to sign the Ivorian international for £72million.

Arsenal welcomed Lyon at the Emirates Stadium today for the Emirates Cup and the gunners lost the game 2-1 and since we are still in the transfer window, Unai Emery’s post match press conference was of course going to see journalists ask him about the possible signing of Nicolas Pepe who is a highly rated winger in the French Ligue one.

Nicolas Pepe was set to join Napoli a few days ago but the gunners have surprisingly entered into the race and are now ahead of all the interested clubs as per the reliable David Ornstein. Unai Emery refused to confirm that the gunners are set to sign Nicolas Pepe but he however said that the Ivorian international is a good player.

“There are different players on the table with the possibility that we can achieve their signature.” Emery told Arsenal.com.

“Pepe is a very good player and also we are thinking only of players who can really, really improve this squad and also give us some different conditions to improve.”

Nicolas Pepe had a phenomenal season at Lille last season, scoring 22 goals and as well as making eleven assists and it looks like the North Londoners have reportedly made him their main transfer target since they lacked a goal scoring winger last season.

Arsenal makes a breakthrough in its pursuit of Nicolas Pepe