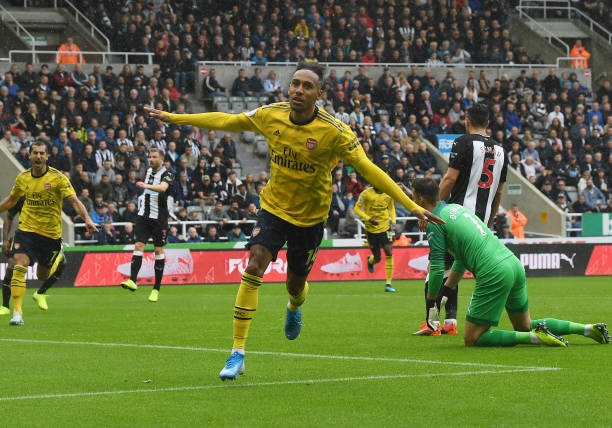 Pierre-Emerick Aubameyang arrived at Arsenal in the 2018 January transfer window and he has been a fantastic signing as he has formed a great partnership with Lacazette which helped the gunners to go all the way to the UEFA Europa League final last season.

Arsenal have in the recently closed transfer window secured the signature of Nicolas Pepe who is a highly rated winger and the club will be hoping that he adds more goals to their side since Unai Emery’s team did look lost in the matches where Aubameyang and Lacazette weren’t on form. The gunners faced Newcastle United on Sunday and they won the match 0-1 thanks to a goal from Pierre-Emerick Aubameyang and the Gabon international is already fantasizing about their upcoming attacking trio.

Nicolas Pepe did not start the match since he isn’t fully fit and Alexandre Lacazette didn’t get any single minute in this season opening game because of an injury he sustained a few days back but he was however on the bench. Aubameyang says that he is happy that Pepe joined Arsenal and claims that him and Lacazette have already started trying to connect with the Ivorian international in training.

“We are happy that Nicolas came,” said the Gabon international. Of course I have a special partnership with Laca but I think we both have the same mentality.” Aubameyang told Goal.

“We play for the team first, so I think it is going to be easy [to play with Pepe].We have tried to connect with him in training and for the moment it is going good, very good.”