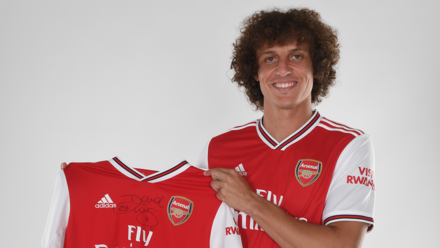 David Luiz has officially joined Arsenal today and he has signed a two-year deal with the gunners who have managed to snap him up from Chelsea for just £8million. The gunners will be hoping that David Luiz forms a great partnership with Sokratis since they will definitely be their first choice centre backs.

David Luiz is definitely a good addition to the Arsenal squad as he is the type of centre back that they need alongside Sokratis since he is a great passer of the ball and his vision could potentially see him get some assists since Aubameyang and Pepe could always be able to get to his passes in time since they are fast.

DAVID LUIZ IS OFFICIALLY A GUNNER

David Luiz has signed a two year deal and this makes sense for the gunners since this gives William Saliba time to develop as a player when he is not under pressure next season. The gunners are currently trying to continue playing from the back and this is probably one of the main reasons why Unai Emery has decided to bring in David Luiz since he is well experienced in playing like this.

Arsenal fans have mixed reactions on this deal but they will definitely welcome anyone that will make Shkodran Mustafi to get benched in this upcoming season. Besides, David Luiz is better than all the Arsenal defenders apart from Sokratis Papastathopoulos.