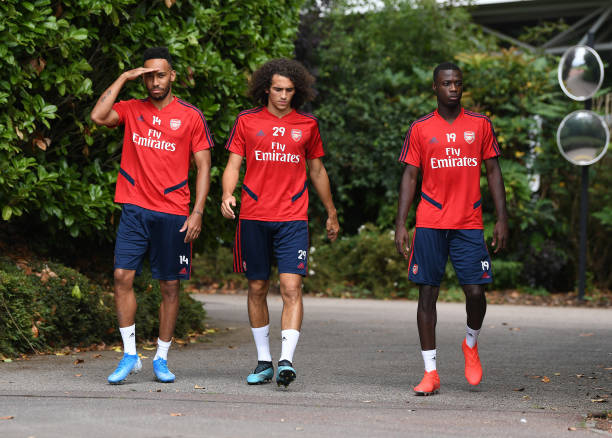 The gunners completed the signing of Nicolas Pepe yesterday and the Ivorian international has started preparations for the upcoming season immediately since the 2019/20 campaign is around the corner. Nicolas Pepe is Arsenal’s record signing and everyone will definitely be expecting a lot from him in the next few months.

The Arsenal squad trained today ahead of their trip to Barcelona on Sunday and it wasn’t just a normal training session as they welcomed a special person to the group. Nicolas Pepe is a major signing for Arsenal and everyone in the squad of the gunners knows this as seen in their expressions as they trained with him for the first time.

NICOLAS PEPE GETS WELCOMED TO THE ARSENAL SQUAD

???? Heading out with @Aubameyang7 and @MatteoGuendouzi
???? Shaking hands with the boss
???? A warm welcome from the squad

Since Nicolas Pepe is from a French speaking country, it wasn’t a surprise that he would have to first be associated with the likes of Matteo Guendouzi and Pierre-Emerick Aubameyang as they also speak the same language. It looks like Pepe has already bonded with them as they walked to the training pitch together.

Arsenal have fully backed Unai Emery in this transfer window and Nicolas Pepe’s arrival is surely a major game changer as he is obviously excited as he welcomes the Ivorian international to his squad. It is going to be interesting how Unai Emery utilises Nicolas Pepe this season.

Saliba and Dani Ceballos speak out on joining Arsenal