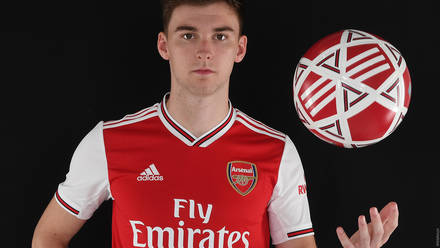 FINALLY! Arsenal have announced the signing of Kieran Tierney from Celtic for £25million after having been in negotiations for two months. Tierney finally becomes a Gunner and it’s poetic that his move to Arsenal has been announced on deadline day when he was the first player to be linked with a move to the Emirates.

Kieran Tierney is a talented left back that will help Arsenal a lot as he is great at defending and going forward, and even though he currently has an injury but it was a risk that Arsenal had to take in order to get him in this summer transfer window since his price would certainly go high in the future so the fans will be glad that this deal has been concluded.

KIERAN TIERNEY IS A GUNNER

Welcome to The Arsenal, @kierantierney1 ????

Kieran Tierney has signed a five-year deal with the gunners and there are some reports that Celtic managed to include a sell on clause if the gunners decide to sell him off. Kieran Tierney is just 22 years old and he is already an exceptional player so the gooners will be hoping that Unai Emery develops him to be one of the best in the world since most football pundits and analysts claim that he good be as good as Liverpool’s Robertson.

Kieran Tierney will probably resume training in a few weeks from now and the club will be hoping that he makes his debut after the international break.