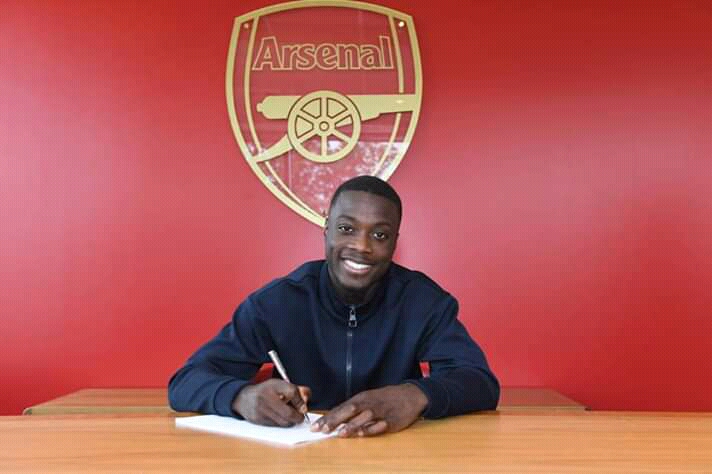 Arsenal have finally completed the signing of Nicolas Pepe from Lille on a record fee of £72million. This move has surprised most Arsenal fans as they never thought that they would sign such an expensive player after they failed to qualify for this year’s UEFA Champions League.

Arsenal have beaten the likes of Liverpool, Inter Milan, Manchester United and Napoli to the signature of Nicolas Pepe and this is actually surprising since the North London club looked set to have a disaster of a summer a few weeks ago after moves for William Saliba, Dani Ceballos, Wilfried Zaha and Kieran Tierney stalled but here we are; two of those players have already been brought and the gunners have made a U-turn on Zaha and signed Nicolas Pepe instead.

NICOLAS PEPE IS A GUNNER

Welcome to The Arsenal, Nicolas Pepe ????

Nicolas Pepe was very impressive last season in the French Ligue one as he scored 22 goals and also made 11 assists hence Lille putting an asking price of £72million on him, this has made the Ivorian international become Arsenal’s most expensive transfer of all time as this was previously held by Pierre-Emerick Aubameyang who joined the gunners from Borussia Dortmund in 2018.

Nicolas Pepe has become Arsenal’s fourth signing of the summer after the acquisition of Martineli, Ceballos and Saliba and it looks like they are doing a great job in this transfer window since everyone expected them to have a budget of less than £45million.

Report: The latest on the Kieran Tierney to Arsenal deal