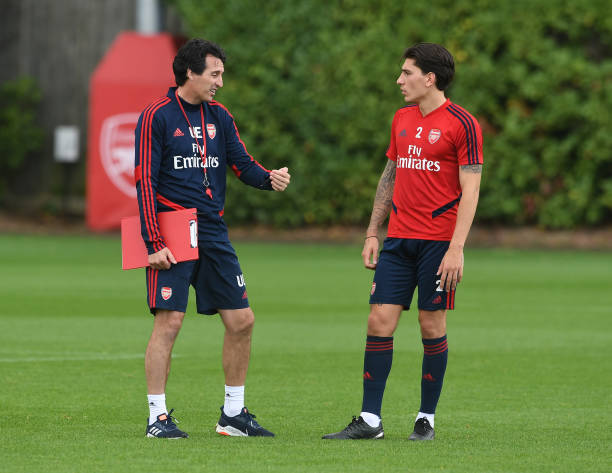 Arsenal will in the next few hours face Nottingham Forest at the Emirates Stadium and they will be hoping to kick off their Carabao Cup campaign with a win. Even though Unai Emery will mostly deploy youngsters in this match, the Arsenal boss has however also delivered some good news about Hector Bellerin and Kieran Tierney.

Kieran Tierney arrived at Arsenal from Celtic in the summer transfer window and he has already played 60 minutes in a U23 match to build fitness while Hector Bellerin has been on the sidelines since January after getting injured in Arsenal’s 2-0 win over Chelsea. The Arsenal fans can’t wait to have Hector Bellerin and Kieran Tierney back into the squad and Unai Emery has hint at playing both of them in today’s match against Nottingham Forest.

“We are going to decide [on Monday on Bellerin and Tierney. The first idea is if we can they’ll have minutes on Tuesday. It depends on their feelings and the decision for the first XI.” Unai Emery told Football.London.

Arsenal has this season missed their first choice fullbacks because their style depends on them so Unai Emery will be hoping that the minutes that Kieran Tierney and Hector Bellerin play in tonight’s game don’t delay their recovery as they are very important members of the squad of the gunners.

Arsenal head coach Unai Emery has however confirmed that Rob Holding will 100% feature in this match because he is ready to play after playing a lot of U-23 matches. The English centre back was very good last season and the Arsenal fans will be hoping that the injury hasn’t heavily affected him.

Gabriel Martinelli speaks out on his first conversation with Aubameyang