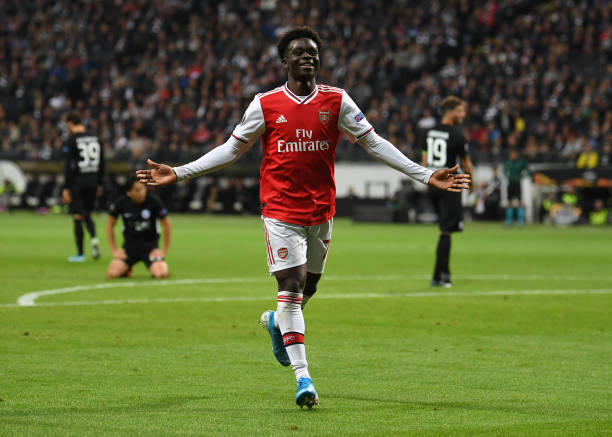 The gunners have today went back to winning ways thanks to an incredible performance from their youngsters especially Bukayo Saka who scored his first Arsenal goal and as well as getting two assists vs Eintracht Frankfurt. The 18-year-old has really caught the eyes of many Arsenal fans tonight as he put on a great performance against a strong German side.

Bukayo Saka wss today put in a front three by Unai Emery and he was very impressive in this position as he was helping the gunners to ease on the pressure and also his combination with Kolasinac was great. The 18 year old got his first assist of the day in the first half after he made a beautiful pass which Joe Willock finished off in style.

Bukayo Saka made today a  memorable day for him in the second half after his shot from 25 yards went straight into the back of the net and then later set up Pierre-Emerick Aubameyang who scored Arsenal’s third goal of the day. Arsenal head coach Unai Emery was obviously impressed with the young winger and said that he hopes that this goal gives him more confidence as per his post-match press conference via Football.London.

“Maybe with his goal and performance he was taking confidence, he was finishing really strong.” said Unai Emery when asked about Bukayo Saka. The Arsenal coach also went on to also praise Emile Smith Rowe and Joe Willock.

“Also with Emile, after his injury. He played for the first time this season. Willock started a little slow at the beginning but progressively he was feeling very better with a good performance.”

Arsenal will this weekend welcome Aston Villa at the Emirates Stadium and the gooners have begun urging Unai Emery to start Bukayo Saka instead of Reiss Nelson as his omission today showed that the gunners boss was maybe keeping him for the upcoming game.