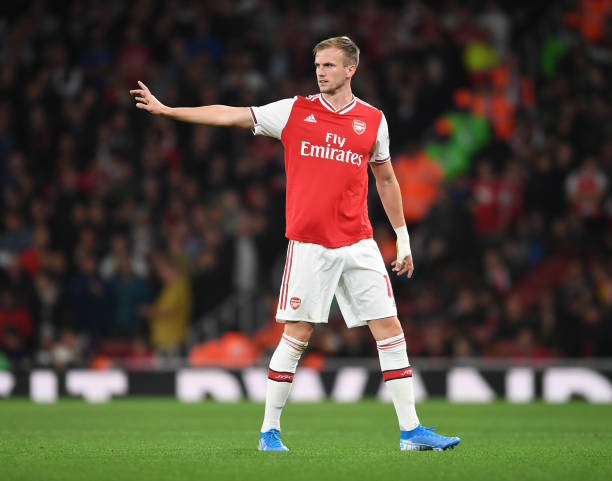 Arsenal is yet to announce its captain for the 2019/20 season because Unai Emery is yet to make a decision on who deserves this title. Laurent Koscielny who was Arsenal’s captain last season left the Emirates in the summer transfer window and Unai Emery has continually been postponing the day that he will announce the captain.

Arsenal defender Rob Holding has revealed how Unai Emery has decided to also include the input of the players in choosing who will be their five captains for the rest of the 2019/20 campaign. Arsenal head coach Unai Emery wants five captains in his squad as he did last season and of those that were available in the previous campaign, only Granit Xhaka and Mesut Ozil are still at the club.

Rob Holding was the vice captain in Arsenal’s 5-0 win over Nottingham Forest on Tuesday and he has said that they did vote the previous week on who they would like to have as their captain, the English centre back has also said that it would be an absolute honour if he is among the five captains.

“He likes his five captains. We had a vote the other week so we’ll see what happens and see who gets named.” Rob Holding told Football.London.

“It was just write names down and then give them to the manager. He will go through them obviously with his input and we’ll see what happens. If I get it, then I’ll be more than happy and honoured to do it.”

The gunners will on Monday face Manchester United at the Old Trafford and the Arsenal fans will be hoping that they have a captain by the time that they play this game. Most reports claim that Unai Emery will announce the captains in his pre-match press conference on Friday.

Emery confirms Xhaka as captain and Aubameyang as the deputy

Gabriel Martinelli speaks out on his first conversation with Aubameyang