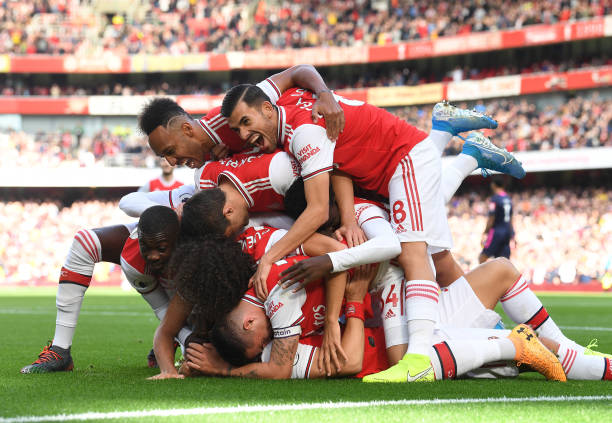 Arsenal have moved into the third position on the Premier League table after they defeated Bournemouth at the Emirates Stadium thanks to a header from David Luiz. The gunners were fantastic in the first half but they however struggled in the second half when Bournemouth changed their tactics so here a few talking points from the game.

Arsenal looked very comfortable in the first half against Bournemouth and they effectively stopped the visitors from having any good chances, however despite their continued hold of the ball, their goal came from a corner which David Luiz put into the back of the net. Arsenal had many corners in the first half because Bournemouth had decided to sit back and wait for opportunities for counter attacks but those moments weren’t available.

Arsenal did have some other chances to score in the first half but their shots failed to find the target. Bournemouth also got one good chance in the first half through a set piece but Solanke’s touch went wide. The first half ended 1-0 in favour of Arsenal but things changed in the second half.

Bournemouth came back into the second half with rejuvenated tactics and confidence and the gunners started panicking and started giving away possession easily. The Cherries got some couple of chances but they wasted most of them and Bernd Leno saved others to keep his team in the game.

Arsenal boss Unai Emery removed Nicolas Pepe to bring in Gabriel Martinelli and the Brazilian international did improve their pressing since it had become poor in the second half. Joe Willock later replaced Ceballos and Torreira came in for Bukayo Saka in the last minutes of the game.

It was a poor performance from the gunners in the second half and Unai Emery will now have two weeks to work on improving his team because the fans are not happy with their performances.

Emery speaks out on what he likes most about Aubameyang