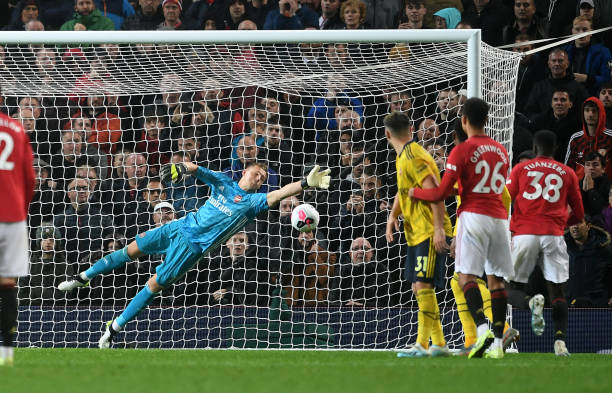 Arsenal has once again failed to get a win at the Old Trafford as they have been held to a 1-1 draw with Manchester United. Arsenal came into this match with the hope that they would end their failure to get a win there in the last 13 years. The Red Devils took the lead in the first half through McTominay who fired in a whooping shot into the back of the net after a quick counter attack by the home side but Arsenal equalized in the second half through Aubameyang who got a good pass from Saka who won the ball off a Manchester United defender. So here are a few talking points from the game.

Arsenal head coach Unai Emery has been heavily criticized this season for his team being too open and it looks like he decided to let Manchester United keep possession as they decided to only pounce on the loose balls and blind passes to start counter attacks. It did work on some occasions in the first half but they missed all those chances with the best being the one which Saka makes De Gea make a nice save and also save another shot by Matteo Guendouzi instantly.

Arsenal fans were hoping that Nicolas Pepe would put out an incredible performance in this match but he was however awful as he continually lost the ball and his shots were super weak. He’s currently not showing that he was worth the €80million that the gunners paid for him. Arsenal’s defensive structure was impressive in the first half until Manchester United finally get their long desired a counter attack which earned them a goal thanks to a great shot by McTominay.

Arsenal equalized in the second half after Bukayo Saka won the ball off a Manchester United defender and passed it to Aubameyang who slotted the ball past David De Gea. The goal was at first ruled out for offside but after a VAR check, it was awarded. Lucas Torreira was once again used as a box to box midfielder by Unai Emery and he didn’t do much wrong apart from missing from close range in the second half and was later replaced by Dani Ceballos who failed to have an impact on the game.

Arsenal’s defence was today a bit okay because it didn’t give Manchester United many chances as it has done in the previous matches and Bernd Leno once again showed why he is Emery’s first choice goalkeeper.

The match ended 1-1 and the under pressure Ole Gunnar Solskjær and Unai Emery will obviously be happy that they shared the points but the fans of both sides will not be happy.