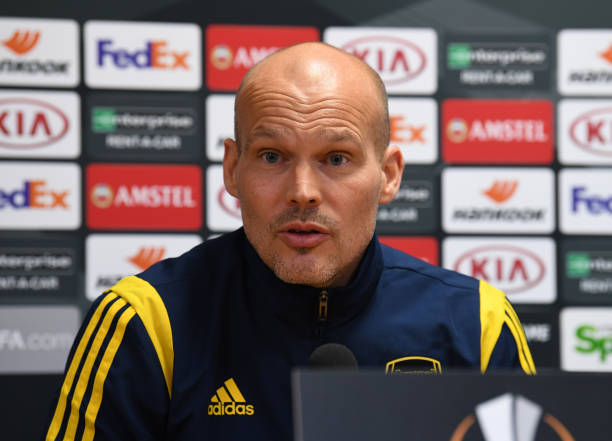 The gunners are through to the UEFA Europa League round of 32 after getting a draw against Belgian side Standard Liege. Arsenal’s interim head coach Freddie Ljungberg was certainly probably happy with that result since the gunners just needed a point to secure their place in the UEFA Europa League round of 32 but there certainly was some questions about the performance of the gunners in that game.

Arsenal used a squad consisting of many youngsters because they have a lot of players on the sidelines at the moment, Dinos Mavropanos came back into the squad after having been with the Under-23 team throughout this season. The young Greek international played in a back three with Sokratis and Luiz since Freddie Ljungberg had no other options.

The gunners started the match well as they were creating some good chances but the finishing by Emile Smith Rowe and Bukayo Saka was poor and they then got punished in the opening stages of the second half. Standard Liege scored two deflected goals and Freddie says that his players can’t be blamed for those goals since they came as a result of a deflection but he however believes they needlessly wasted chances in the first half.

“We played really well in our gameplan in the first half. They didn’t have any shots on target. We should have maybe been one or two up at half-time.”

“We got sucker-punched a bit, they scored two deflected goals… you can’t really slam the players for that.” Freddie Ljungberg told Football.London.

“We could have folded but we didn’t. 2-2, we could have got a 3-2 but I had the information about the other score so we didn’t go too hard.”

So it looks like the gunners didn’t push hard for a winner after getting information about Eintracht Frankfurt game which meant that they would still finish as the group leaders even if they lost against Standard Liege.