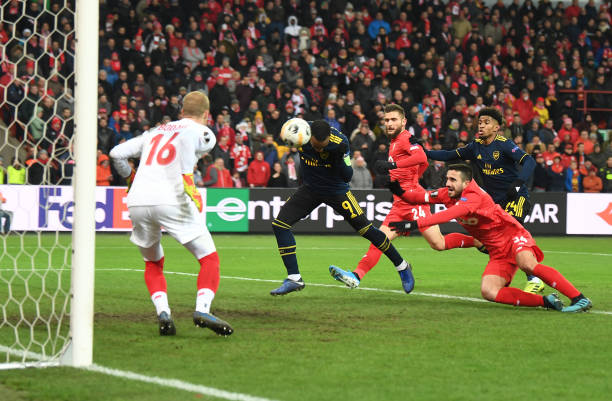 Arsenal have today qualified for the UEFA Europa League round of 32 after they came from two goals down to get a 2-2 draw with Standard Liege. The gunners came into this match well knowing that they needed just a point to go to the next stage and they did just that thanks to second half goals from Lacazette and Saka. So here are a few talking points from the game.

Arsenal as always was very poor defensively and their continuous use of playing out of the back almost cost them two goals in the first half after Luiz and Dinos Mavropanos gave away the ball near their penalty box but luckily they survived. Standard Liege were impressive in the second half and finally got the opening goal after a shot by Samuel deflected off Sokratis and went straight into the back of the net. The second by Selim was also a deflection and this did put the gunners on pressure for a moment before they made a come back.

Arsenal wasn’t bad offensively but they wasted a lot of chances in the first half, notably the two opportunities that were set up for Bukayo Saka and Emile Smith Rowe. The gunners looked shot of confidence when they looked for a consolation goal after Standard Liege’s second went in but Freddie Ljungberg changing the formation to a back four helped as the gunners now attacked with more numbers and finally got one through Lacazette who headed home a cross from Bukayo Saka.

Bukayo Saka once again stepped up as he linked up well with Martineli before sending a whooping shot into the back of the net to make it 2-2. The match ended 2-2 and Arsenal have won the group (F) with Eintracht Frankfurt finishing second despite losing today.

Freddie Ljungberg has now got one win in his first four matches as the interim head coach of Arsenal, the gunners will on the weekend face Manchester City at the Emirates Stadium.