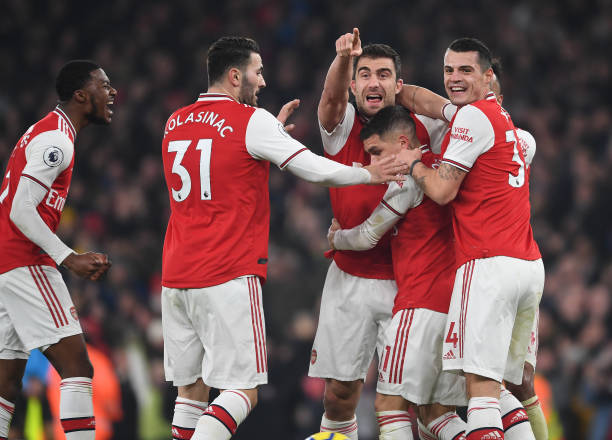 Arsenal have got their first win under Mikel Arteta after beating Manchester United 2-0 at the Emirates Stadium to put their season back on track. Goals from Nicolas Pepe and Sokratis Papastathopoulos were enough to make sure that the gunners got all the three points and so let’s take a look at a few talking points from the game.

Nicolas Pepe made a return to the Arsenal starting eleven last night and he made sure to take the chance as he scored Arsenal’s first goal of the night after he received a great cross from Sead Kolasinac. He made a lot of contributions in the game and almost got a second but his shot hit the post. He was however subbed off in the 63rd minute for Reiss Nelson who is better than him at doing defensive duties.

The gunners controlled the whole first half and took their chances, which is something they didn’t do in the game against Chelsea but their pressing was very effective as it made Manchester United needlessly give away the ball numerous times. It’s very clear that Mikel Arteta has made a number of changes because the gunners are certainly heading in the right direction.

Alexandre Lacazette started once again for the gunners last night and he almost had a perfect match but he however failed to put the ball into the back of the net, he will however certainly be happy with how he performed as his hold up and pressing helped the gunners get many chances. He looked exhausted when he got subbed off for Matteo Guendouzi.

Manchester United did try to have a dominant spell but they failed to get any clear-cut chances since the gunners were very compact and every player was closing down the visitors. The gunners did however get a blow in the second half after Sead Kolasinac got injured but his replacement Saka put in a decent shift, Sokratis and Luiz worked well to stop Ole Gunnar’s attacking three. Mesut Ozil and Pierre-Emerick Aubameyang had an incredible performance as well in this match and the Arsenal fans definitely had a great evening since everyone in the squad worked their socks off.

Mikel Arteta starts 2020 with a win over Manchester United and the gooners will be hoping that he builds over this game to a sort of winning run.