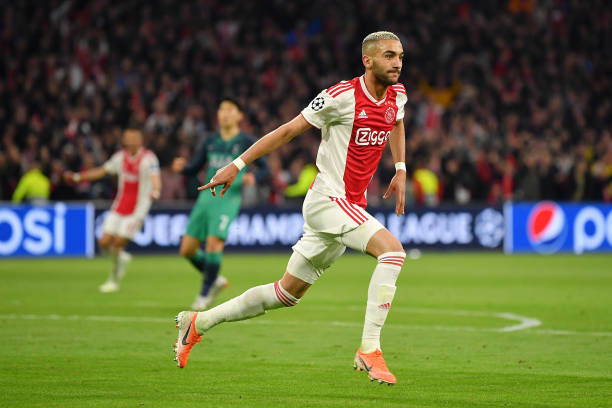 Hakim Ziyech has been very impressive in the last few months and has attracted interest from a number of European clubs including Arsenal. The gunners were linked with the Moroccan international in the summer transfer window but the gunners couldn’t afford him as they decided to be better to invest most of their funds in the purchase of Lille’s Nicolas Pepe.

Hakim Ziyech was very influential in Ajax’s league title win and their wonderful run in the UEFA Champions League last season and he has been just as good in this campaign, and reports are now linking him with a move away from the Eredivisie Champions. Italian outlet CalcioMercato has confirmed that Hakim Ziyech has been given the green light to join his preferred club in the January transfer window as long as his £43million price is met.

The gunners are interested in the 26-year-old playmaker according to the same report and so it’s going to be interesting if the North Londoners do make a move for Hakim Ziyech since he did openly admit that he was a gooner in the past. Mesut Ozil has been very impressive ever since Mikel Arteta took over and so the arrival of Hakim Ziyech would mean that the Moroccan international would be played on the flank.

Arsenal’s January transfer business is still unclear but most reports in England claim that the gunners will only make a loan deals and it is a fact that Ajax wouldn’t accept to let Hakim Ziyech leave on loan unless when it is has an obligation to buy clause.