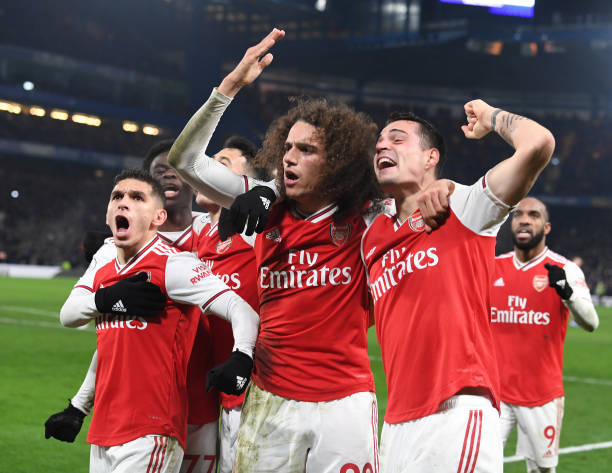 Arsenal made a 2-2 draw with their London rivals Chelsea after a thrilling 90 minutes of football at the Stamford Bridge. The gunners came into this match with the hope of getting a win but they however went away with a draw but it wasn’t just any regular tie as it was a spiritual performance from the North London side as they came from a goal down twice to draw with Chelsea despite playing with 10 men for more than 60 minutes. So here are a few things noticed in the game.

Arsenal started the match poorly as they let Chelsea dominate them and the Blues seemed to target Bukayo Saka’s flank since he is not a natural fullback and they sometimes got past him but luckily, the gunners didn’t concede. Things went bad for Arsenal in the 26th minute after a poor pass from Mustafi got pounced on by Abraham and Luiz had no choice but to foul him in the box resulting into a red card for him. Chelsea’s Jorginho converted the penalty and the gunners then played the rest of the first half with Xhaka at centre back.

Many thought that Mikel Arteta would make a substitute at the start of the second half but he didn’t and the gunners defended very deep and stopped almost everything that Chelsea threw at them while trying to hit them on the counter. Mesut Ozil was later replaced by Matteo Guendouzi as Arteta wanted more energy in trying to stop the Chelsea team which was completely dominating the game.

Arsenal finally got on the score sheet after a quick counter attack by Gabriel Martinelli saw him get in a one on one situation with the goalkeeper and the 18-year-old showed incredible composure and put the ball into the back of the net. Just like that, with the help of a slip from Kante and a wonderful finish by Martinelli, the gunners were back in the game.

Arsenal then became confident and tried to use the same tactics of being compact in their penalty box and wait for counter attacking opportunities, Holding was later brought on for Nicolas Pepe. Chelsea’s continued pressure finally paid off after Azpilicueta fired home from a corner to give the home side a 2-1 lead.

This was a really big punch to the Arsenal players as you could see their disappointment for not holding the home side for a little longer but it didn’t long for them to equalise through none other than captain Hector Bellerin who fired in a great shot, which went past Kepa in the 87th minute. Willock came into the game in the last minutes and the gunners were able to hold onto a 2-2 draw.

Although Arsenal did not beat Chelsea, Mikel Arteta will however be proud of his team because it came back from a goal down twice to draw with Chelsea away from home. Gabriel Martinelli and Hector Bellerin put on incredible performances and their two goals were very important for the North Londoners as this game will help them build confidence.