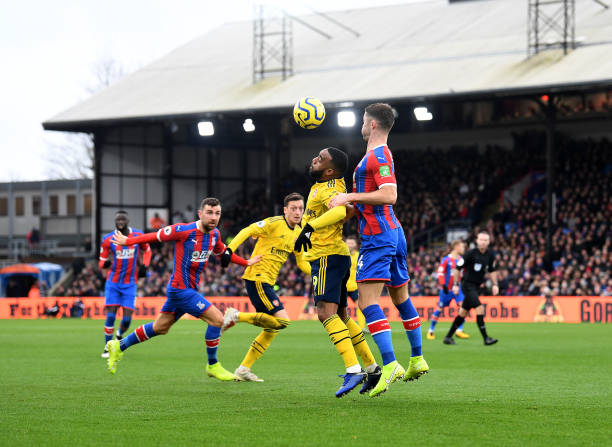 Arsenal has today made a 1-1 draw with Crystal Palace after a poor second half performance from Mikel Arteta’s side which had taken the lead in the first half thanks to a wonderful goal from Aubameyang. We take a look at a few talking points from the game which has seen the gunners fail to climb higher up on the Premier League table.

Arsenal started the match very well as they held onto possession and didn’t allow the home side to have many touches in their half. The gunners created some chances through some long balls from Luiz to Aubameyang but those didn’t produce any shots but the gunners still had full control of the game.

The gunners finally went ahead thanks to a crisp move started by Luiz whose pass received a flick by Ozil and Lacazette sent Aubameyang through to goal and the Gabon international put the ball into the back of the net. Arsenal seemed to be very relaxed after getting the goal and allowed Crystal Palace to get back into the game but managed to hold onto the lead until the referee blew the whistle for halftime.

Lucas Torreira who was very useful in the first half got subbed off at halftime due to an injury and the gunners missed him a lot in the second half because Matteo Guendouzi doesn’t have the same presence that the Uruguayan international has when on the pitch.

Arsenal came back from halftime with low confidence and let Crystal Palace have the ball and the home side kept getting many free kicks, and one finally became useful as Ayew’s shot deflected off the legs of David Luiz and went in to make it 1-1. You could see that the Arsenal players had the “not again” look on their faces as that goal went in.

Arsenal’s game went from bad to worse in the 67th minute after Pierre-Emerick Aubameyang got sent off for a dangerous tackle on Crystal Palace’s Meyer. This saw Mikel Arteta bring in Gabriel Martinelli in for Mesut Ozil and the young Brazilian international did have an impact on the game.

Crystal Palace did have a small spell of dominance after the gunners got reduced to 10 men but the gunners did have a better chance of going away with all the three points after Lacazette passed the ball to Pepe who was in the 18 yard box but the Ivorian’s shot was saved and Lacazette’s rebound was poor.

The match ended 1-1 and Mikel Arteta definitely went home unhappy with that performance because those three points would have been so up lifting for the mood around the club. As for the top four race, it looks over for Arsenal as they can’t get manage to catch Chelsea now who are eleven points ahead.