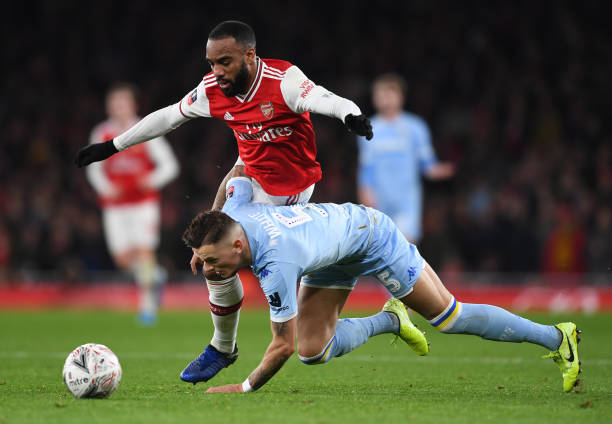 Arsenal striker Alexandre Lacazette captained the gunners last night as they defeated Leeds United 1-0. The gunners were favourites to win the match but they however almost lost the game in the first half as Leeds United created a lot of chances but their finishing was so poor. Mikel Arteta needed that halftime break as his team looked very lost in the first 45 minutes and Lacazette reveals what happened in the dressing room.

Leeds United were outstanding in the first half as they continually pressed the Arsenal team and created chances but failed to put one in the back of the net and the gunners then later came out for the second half with much more determination and created better chances. Arsenal became the better team at pressing in the second half and finally went ahead in the 55th minute after Reiss Nelson put the ball into the back of the net due to poor defending from Leeds United.

Alexandre Lacazette has revealed that Mikel Arteta was shouting a lot in the dressing room at halftime because he was not happy with what he’d just seen in the first half.

“He shouted a lot! He was not happy because we knew they were going to play like this and we didn’t respect what he said. The second half was better and thank you, Reiss, for the goal.” Lacazette told BBC SPORT as quoted by Goal.com.

“Emotions are very high. They played very well in the first half and of course Leeds are a great team, I think they pressed us and we didn’t expect it. We got the final goal in the end and that’s the most important thing.”

Arsenal fans were certainly happy with the performance of their team in the second half and huge credit has to go to Mikel Arteta who clearly changed his tactics so that the gunners can dominate Leeds United.