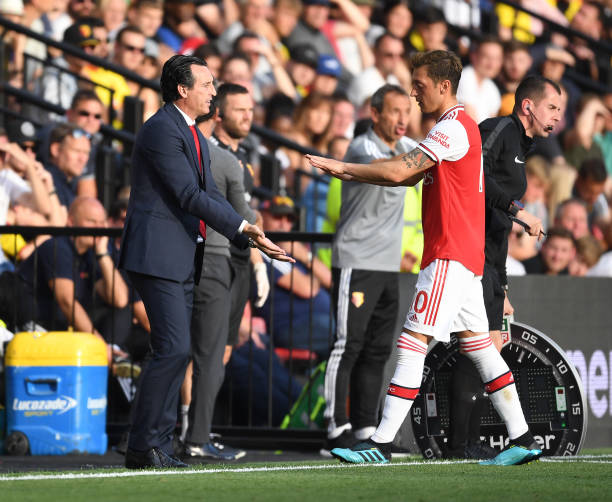 Arsenal midfielder Mesut Ozil has impressed in the last five matches under Mikel Arteta and this has raised questions on whether the German midfielder was badly coached by Unai Emery as these two visibly clashed in the 18 months that the Spanish coach was at the Emirates Stadium.

Mesut Ozil was included in Arsenal’s five captains last season but he however started clashing with Unai Emery a few months after that as the then Arsenal boss reportedly felt that the German international wasn’t putting in enough effort for the gunners. Unai Emery then started leaving Mesut Ozil out of the matchday squads and later brought him back and everyone thought that this would not be the case this season but it still happened.

Mesut Ozil was once again this season left out of the matchday squads of the gunners after their 2-2 draw with Watford but was once again brought back but Unai Emery was however finally sacked after the loss against Eintracht Frankfurt. Mesut Ozil has looked happy in matches ever since Mikel Arteta arrived and has finally opened up how he had a hard time under Unai Emery.

“I had a hard time, especially with the previous coach Unai Emery, but now everything has changed, and I am very happy with everything. I play regularly and everything goes well.” said Mesut Ozil as quoted by The Mirror.

Mesut Ozil has already said in a few interviews that he is happy with the appointment of Mikel Arteta and he also claimed that new the Spanish coach has already begun trying to bring back Arsenal’s old playing style since Unai Emery wasn’t a big fan of possession football.

Mikel Arteta speaks out on Martinelli’s performance against Sheffield United