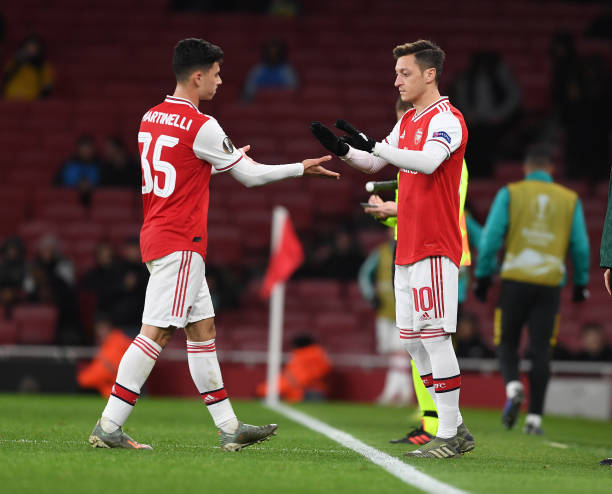 Arsenal will today face Bournemouth in the FA Cup fourth round at the Vitality Stadium. Mikel Arteta will be hoping that the gunners get back to winning ways starting with this game since his side have drawn their last three matches. So here is the predicted Arsenal lineup with all eyes on Ozil and Martinelli.

Emiliano Martinez is Arsenal’s second choice goalkeeper and after saving the gunners against Leeds United in the previous round, he will definitely start tonight.

Sokratis will be available for this match after having missed the last two due to illness and so will be partnered with Holding. Ainsley Maitland-Niles will return to the starting eleven and Saka will once again fill in at least back.

Lucas Torreira has been the most important midfielder at Arsenal ever since Mikel Arteta arrived and so he will today be replaced by Matteo Guendouzi. Guendouzi will be partnered with Xhaka and the young Frenchman will be hoping to impress his new boss since the gunners are reportedly in the search of a new midfielder.

Martinelli has scored two goals in the last two matches and so him and Nicolas Pepe will be on the flanks while Mesut Ozil plays in his favourite no.10 position. Ceballos might not start today because Arteta has shown immense trust in the German international.

Eddie Nketiah was not allowed to go on loan in this transfer window and so Arteta will give him his first start today against Bournemouth.