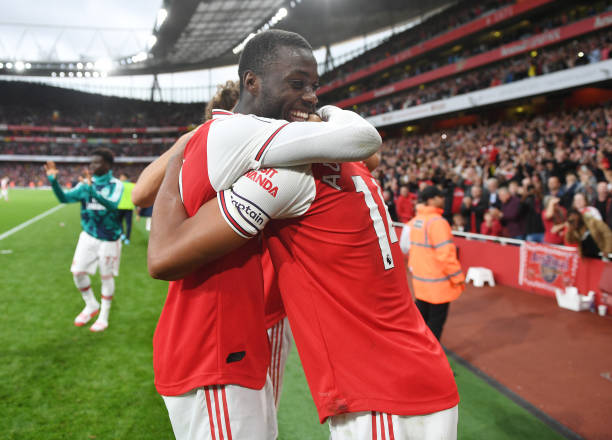 ( Aubameyang and Pepe / Photo via Getty )

The gunners will today face Crystal Palace at the Selhurst Park and they will be hoping to get all the three points from the match as this would see them go higher up the Premier League table. Here’s the predicted Arsenal lineup to face Crystal Palace with all eyes on Pierre-Emerick Aubameyang and Nicolas Pepe.

Bernd Leno will today be in between the goal posts despite Martinez’s impressive performance against Leeds United. The German goalkeeper will be hoping to get a clean sheet this afternoon.

Arsenal head coach Mikel Arteta has improved the performances of Granit Xhaka and Lucas Torreira and since they are fit today, they’ll be paired together as they’ve been impressive in the last few games.

Nicolas Pepe scored in Arsenal’s previous Premier League match and so Arteta will definitely reward him with a start today. Aubameyang will be on the opposite flank and Mesut Ozil will be in his favourite no. 10 position.

Alexandre Lacazette has been so poor infront of goal in the last few games but he has however embraced Mikel Arteta’s tactics as he is working harder but he has however failed to convert his chances. Arteta will definitely start him today despite Martinelli’s return.