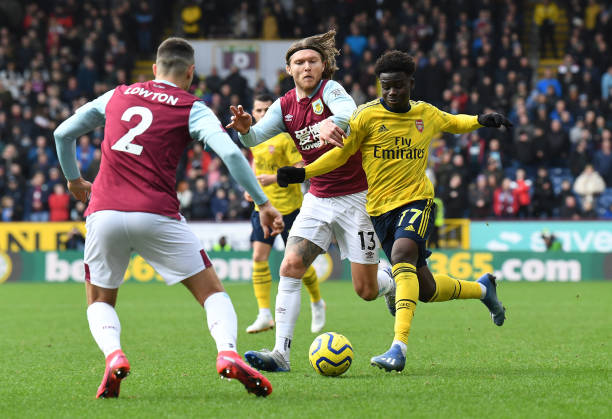 Arsenal faced Burnley on Sunday and they made a 0-0 draw and apart from dropping two points, the gunners were definitely disappointed to see Bukayo Saka go off injured at halftime when he was starting to go on form. The 18-year-old has played as a left back for the gunners in the last few weeks and Mikel Arteta has given an update on his injury.

Bukayo Saka was selected in the starting eleven that took on Burnley because Sead Kolasinac and Kieran Tierney are still on the sidelines, he however got a hip injury in the first half and even though he was able to finish the first 45 minutes, it was clear that he was going to be subbed off since he looked to be in pain as the players headed for the dressing room at halftime.

Arsenal head coach Mikel Arteta faced the media after the match and he confirmed that Bukayo Saka got a knock in the first half and also explained how the gunners missed him in the second half since he is a threat going forward.

“He had a knock in his knee and his hip, so we will see. He’s been a threat for us and in the way we planned the game, we thought we could exploit them with him and he did really well when he was fit.” Mikel Arteta told Arsenal Player.

“I think in the last 10/15 minutes he was carrying his injury. We decided to substitute him because he wasn’t feeling good, so tomorrow we will know how he is.”

The gunners will be hoping that Bukayo Saka’s injury doesn’t turn out to be serious because it’s not guaranteed that Sead Kolasinac will be match fit after the break and the idea of having the 18-year-old in the left back position was starting to sit well with the fans since he has been impressive in the last three matches including scoring a banger against Bournemouth in the FA Cup fourth round.