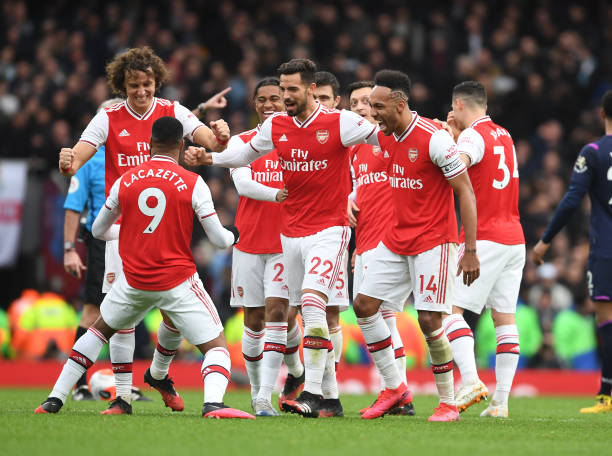 Arsenal have got closer to the Premier League top four after a 1-0 win over West Ham United thanks to a late goal from substitute Alexandre Lacazette. This was a very important game for Arteta’s men and they were able to get those important three points and this sees them go back into the race for a UEFA Champions League spot. Here’s a few talking points from the game.

Arsenal started the match poorly as Granit gave away the ball near the penalty box which resulted in a chance for West Ham United’s Bowen shooting it first time but Leno made the save and it hit the post to the relief of the gunners. The Hammers got more chances including a two vs one situation but the communication was poor from Haller and Antonio hence the gunners clearing the ball and the score remaining 0-0.

Arsenal’s first chance of the game came in the 13th minute after Mesut Ozil’s shot was blocked but they however went close again but Sokratis’on target header hit the bar. Both teams continued having chances in the first 45 minutes but neither side was able to find the back of the net but the gunners did go back in the dressing room with frustration after their penalty claims had been denied. Arsenal’s front three were not that involved in the first half and they midfield was needlessly giving away counter attack opportunities for the visitors.

Nketiah almost gave the gunners the opener in the 52nd minute but his shot was however saved by former Arsenal goalkeeper Fabianski. A few minutes later, Bernd Leno was also brought into action to prevent a header by Haller in the centre of the penalty box. The score remained 0-0 but both sets of supporters remained tense.

Alexandre Lacazette replaced Nketiah and Reiss Nelson also later replaced Nicolas Pepe who really seemed to be having a similar performance like the one against Olympiacos. These two completely changed the game for the gunners as they brought in tempo and Lacazette’s hold up play was great for the gunners.

Arsenal finally found the breakthrough in the 78th minute after Aubameyang’s shot was blocked but it found its way to Mesut Ozil and he flicked it to Lacazette who then put the ball into the back of the net. It was at first ruled out for offside by the lineswoman but VAR overturned that decision. The match ended 1-0 in favour of Arteta’s men and they now have a big chance of playing in the UEFA Champions League next season.

Manchester City 3-0 Arsenal: All you need to know