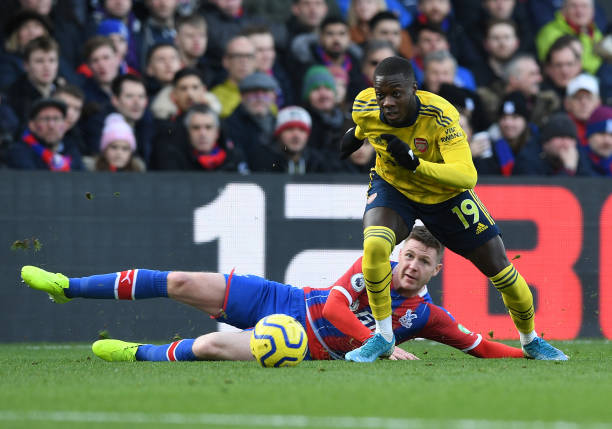 Nicolas Pepe arrived at Arsenal from Ligue one club Lille for a record £72million fee in the summer transfer window but the gunners have however haven’t been impressed with him because they thought that he would be the missing piece for them propelling to a comfortable Premier League top four finish. Mikel Arteta has however vowed to try to turn Nicolas Pepe into a world-class player but he however believes that it will take some time.

Nicolas Pepe was among the top scorers in the top five leagues last season after scoring 22 league goals and also made 11 assists but the Ivorian international has not had similar numbers in the Premier League as it looks like he is adaptation to English football will be a bit slow. Arsenal’s previous head coach Unai Emery failed to make Pepe turn into an important player in the squad because  his numbers were low and got dropped by the Spanish coach but Arteta has brought him back to the starting eleven but his numbers are still not good.

Nicolas Pepe has scored six goals and made six assists in all competitions for Arsenal this season and Mikel Arteta has revealed the plans he has for the former Lille star who looks likely be labeled as a flop.

“I’ll show him footage of what we want and on the training ground I will make him defend in situations where he is full-back and I am the winger.” Arteta told Goal.com.

“He has to feel the moments when the ball is in a position where you are weak and, depending on the steps you take, how it affects the opponents.”

“He needs to know where are the spaces for the strikers and when they want the ball delivered in certain areas. It’s all part of a process.”

The gunners will be hoping that Nicolas Pepe has a similar story to that of Leroy Sane and Raheem Sterling who have all admitted that Mikel Arteta was among the reasons why they’ve been outstanding wingers in the last two years. Arsenal will desperately want Nicolas Pepe to be a success because he is a huge investment and since they could lose Aubameyang in the summer, they’ll be hoping that he starts regularly banging in goals.

Bernd Leno reveals the reason why Arteta’s Arsenal is fearsome