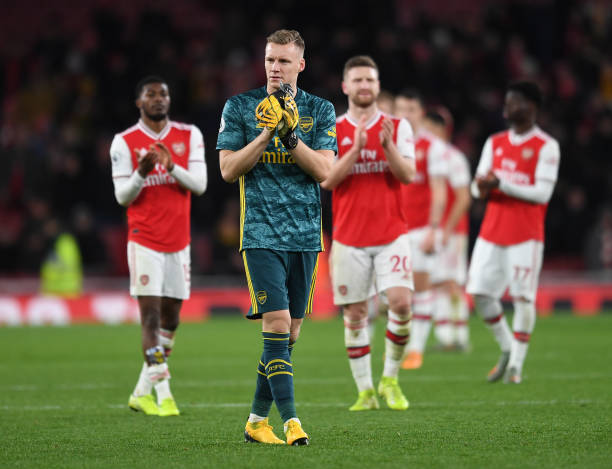 Arsenal is now unbeaten in the league in eight matches after their latest 1-0 win over West Ham United and their goalkeeper Bernd Leno has spoken out on why Mikel Arteta’s side will only keep improving in the next few months.

Aside from the disappointing early UEFA Europa League exit, the gunners were among the few clubs to be unbeaten in 2020 and they’ve in the recent weeks got closer to their rivals such as Tottenham Hotspur who are now just one point ahead of Mikel Arteta’s side. The gunners came into the match against West Ham United after a 2-0 win over Portsmouth in the FA Cup had seen them qualify for the FA Cup quarter finals.

The gunners were however poor against West Ham United as they continually gave the visitors many clear-cut chances but still managed to hold on and then later won the game in the second half after Mesut Ozil and Lacazette combined to help Arsenal get all the three points.  Arsenal goalkeeper Bernd Leno believes that them having a poor performance against Hammers and yet still getting the three points shows how they’ve an outstanding mentality under their new boss Mikel Arteta.

“Yes, I think you could see many games like this.  ( On if there’s a new mentality at Arsenal. ) Also Chelsea away, 2-2, it was only a mentality game with the red card and yes, I think we are happy about our mentality.” Leno told Goal.com.

The Arsenal fans will be hoping that their team keeps up with the winning mentality because draws have been of their main problems this season and if they can keep turning possible draws to wins, then they could have a chance for UEFA Champions League football.