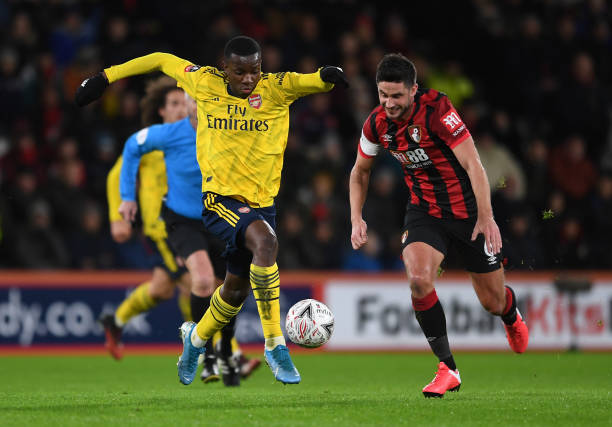 Arsenal will today face Portsmouth in the FA Cup 5th round and they will be hoping to walk away with the win against this League One side since the fans will be demanding more from the players after they embarrassingly crashed out of the UEFA Europa League. So here’s Arsenal’s predicted lineup with all eyes on Nketiah and Martinelli.

Arsenal boss Mikel Arteta has already said that he won’t just play the second goalkeeper in cup competitions if he doesn’t work hard for a spot in the starting eleven. So Leno could once again be in between the goal posts today to avoid any danger of getting knocked out in another competition.

Pablo Mari might be in the matchday squad that faces Pompey but he however could be on the bench with Holding and Luiz as centre backs in this one. Ainsley Maitland-Niles played an U-23 game as left back and will probably start in that position today since Saka needs a rest, Sokratis will also fill in at right back since Bellerin can’t play all the games.

Granit Xhaka has played every minute ever since Arteta got appointed but he however could be rested for today’s FA Cup game hence Lucas Torreira and Matteo Guendouzi getting paired together against Portsmouth tonight.

Pepe and Aubameyang looked exhausted in Arsenal’s Europa League game against Olympiacos and so they could be rested or benched tonight so that Gabriel Martinelli and Reiss Nelson could get a chance on the flanks. Joe Willock could as well start in the central attacking midfield position ahead of Ozil for rotational purposes.

Lacazette missed a couple of chances in Arsenal’s previous game and it will only be fair to give Nketiah another start since he scored in the most recent Premier League game.

Arteta finally reveals why Maitland-Niles is no longer playing games