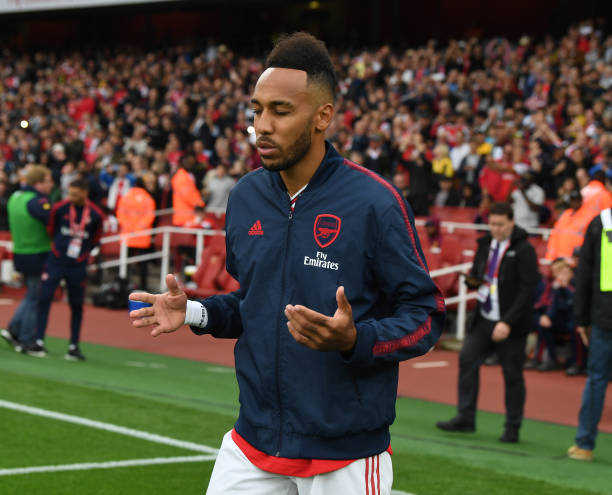 Arsenal signed Pierre-Emerick Aubameyang from Borussia Dortmund in the 2018 January transfer window and he has been an exceptional signing as he has scored more than 50 goals for the club in a short period of time. The gunners will however struggle to keep him as he’s yet to sign a new contract and a top European club has made contact.

Aubameyang will soon enter the final year of his current deal at Arsenal and there are many clubs waiting for this to happen so that they can get him on the cheap since there’s currently very low chances of him signing a new deal with the North Londoners as he wants to play for a UEFA Champions League and Arsenal is currently nineth on the Premier League table and may not qualify for it.

A report by France Football is now claiming that Real Madrid have an initial enquiry about the price of Pierre-Emerick Aubameyang ahead of the summer transfer window as they’ll be looking to sign a striker in this upcoming transfer window as Karim Benzema is getting older and their big signing in 2019, Luka Jovic has failed to impress in the Spanish LA Liga as he has only scored two goals.

Aubameyang is a player that would instantly improve Real Madrid and so it is no surprise that the European giants want to bring the Gabon international to the Santiago Bernabéu. The gunners disadvantage if Real Madrid do end up making a bid for the 30-year-old in the summer because he has always said that he is dream is to play for them before he retires from football, so it would basically be a dream for Aubameyang to join Real Madrid as it is also a wish that his father wanted him to accomplish.

The report by France Football did however add a comment by an intermediary in which he says that on the transfer market, a player of Aubameyang’s quality in his last year is worth €50million but he however believes that Arsenal would rather sell Alexandre Lacazette and then bring in another attacker.