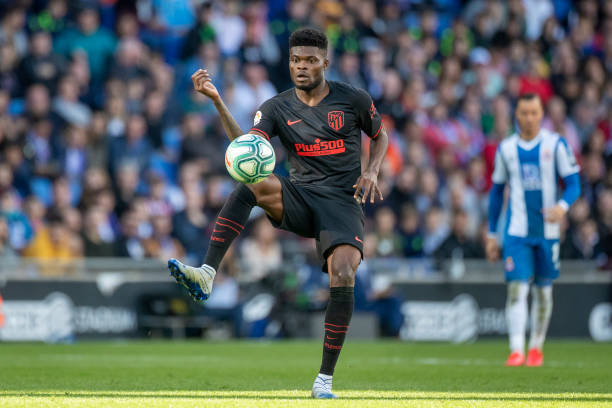 Arsenal will be looking to sign a new defensive midfielder in the upcoming summer transfer window and they have identified Thomas Partey as the player that would improve them but it’s however well-known that they will have a tight budget. Current reports are however revealing that Arsenal have identified a new way to reduce on the price of Atletico Madrid’s Partey.

Thomas Partey has been one of the best defensive midfielders in Europe this season as he has been one of the players that helped Atletico Madrid to reach the UEFA Champions League quarter finals which included two wins over Liverpool who some consider to be the best team in the world at the moment.

Arsenal have been linked with Thomas Partey for a long time and The Sun is now reporting that the gunners will be looking to sign him in the summer and that they would even consider an exchange deal that would see Alexandre Lacazette go to Atletico Madrid. Since Partey is younger and worth more than Lacazette then the gunners would exchange their striker with an additional small amount. Alexandre Lacazette joined Arsenal in the 2017 summer transfer window but he has however failed to become the first choice striker under three different managers and so it’s no surprise that the gunners would consider using him.

Alexandre Lacazette, 28, was once a transfer target of Atletico Madrid and Diego Simeone is still on the lookout for a striker and so the gunners will be hoping to use that opportunity to get Thomas Partey as its believed that he is Mikel Arteta’s first priority in the transfer window. Partey was linked with a move to Arsenal in last year’s summer but it has been later been confirmed by David Ornstein that the gunners failed to pay up the amount for him since they had already used most of their budget to bring in Nicolas Pepe but the 26-year-old was however interested in a move to Arsenal as per the The Athletic journalist.

The report by The Sun also adds that Arsenal will not be afraid to indeed include Alexandre Lacazette in the deal that would bring Partey to the Emirates Stadium since the impressive form by Eddie Nketiah has shown that the French striker could easily be replaced.