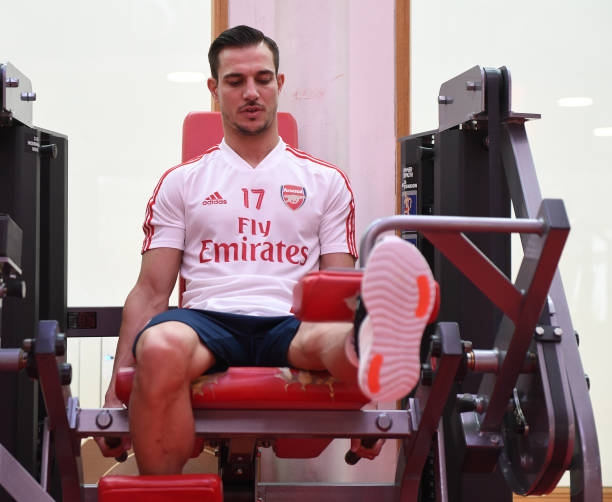 Arsenal signed Cedric Soares on a loan deal from Southampton in the 2020 January transfer window and he is however yet to feature for the gunners this season because they signed him when he was still on the sidelines. Cedric Soares has however come out to speak about his wait for a debut and hint at wanting to stay at the Emirates Stadium.

Arsenal decided to look into the transfer market for a right back in January after Mikel Arteta made it clear that he wanted to have players in their rightful positions and so the club identified Southampton’s Cedric Soares who is a very decent defender that could also help in attack and the gunners got him on a loan deal but the coronavirus global pandemic has deprived him of his debut for the North Londoners.

Soares is on a six month on loan deal at Arsenal and the club is expected to make a decision on whether they want to permanently sign him or not but he will however not be returning to Southampton as he will be a free agent. Cedric Soares has however hint at wanting to permanently stay at Arsenal in his latest comments about waiting for a d but. The Portuguese says that Arsenal was a club that he always admired from afar.

“I wanted to be involved as soon as possible, but coronavirus is a world problem and I think as a country we are all responding very well together.” Cedric Soares told Sky Sports.

“I’m very excited for my first game for Arsenal. It’s a game of patience and I know it will happen in the near future. It’s a club I always followed from afar. I remember Ian Wright, Thierry Henry, Robert Pires, Patrick Vieira and Dennis Bergkamp. Always when you think of Arsenal you think of these players as they were legends for the club.”

FIFA has already released guidelines about the contracting of players and so Arsenal won’t lose Cedric Soares in the summer if the deal he signed with the gunners expires when the 2019/20 season is yet to continue.

Arsenal legend speaks out on what Bernd Leno needs to improve at!