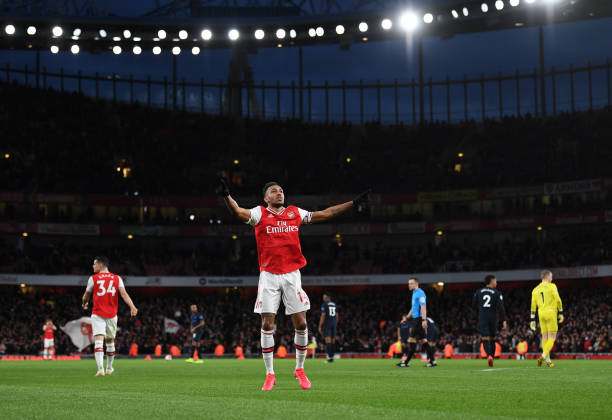 Arsenal signed Pierre-Emerick Aubameyang in the 2018 January transfer window when they lost Alexis Sanchez to Manchester United and the former Borussia Dortmund striker hasn’t disappointed as he quickly started producing and won the golden boot in his first full season as a gunner.

Pierre-Emerick Aubameyang has been so good for Arsenal that the fans have started saying that he would have surely been the player to break Thierry Henry’s goal scoring record if he was signed about two years earlier as the man just can’t stop putting the ball into the back of the net. It’s no secret that Aubameyang is an outstanding player but here are two impressive stats that you might not have known.

The gunners currently have 40 points this season and Pierre-Emerick Aubameyang has helped them get 16 points of those and this further shows how the North Londoners don’t have many goal scorers in their squad as he is usually the main to score their winning goals or find the net to help them get a draw.

If you look at last season’s stats then you will have a similar stat as Aubameyang was once again Arsenal’s best player but Lacazette was also impressive back then as Unai Emery used to bring him in as a late sub to change games to their favour.

2. AUBAMEYANG IS THE FIRST PLAYER TO SCORE 20 GOALS IN BACK TO BACK SEASONS SINCE RVP (CONSISTENT)

Robin Van Persie was an incredible player for the gunners and it looks like the gunners have finally found the player that could score as much as him in Aubameyang but it is however unfortunate for the Arsenal fans as their new shining boy might also have to leave them at a bad time. Aubameyang scored 30 goals in all competitions last season and he has already reached 20 for this year’s campaign with more than 10 games to go.

Three reasons why Unai Emery will not sell Shkodran Mustafi