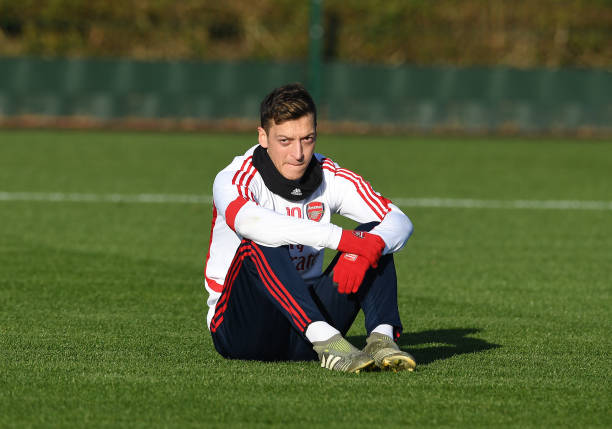 Arsenal announced yesterday that their players had voluntarily accepted to take a 12.5 percent pay cut in order to help out the club which has taken a financial hit due to the Coronavirus pandemic. It was reliably reported that there were some players that hadn’t accepted this pay cuts and tabloids yesterday released reports that Mesut Ozil who was one of them.

Arsenal started negotiations with the players about two weeks ago and the club seemed to have failed to convince the players for accepting the pay cut but then Mikel Arteta later intervened and convinced majority of them to agreeing hence the club making the announcement yesterday even though not 100% of them accepted to it. Reports last night then released reports that Mesut Ozil had refused to accept the pay cuts despite the majority of the squad having accepted them.

Mesut Ozil has in the last few hours faced a lot of criticism from the Arsenal fans on social media because he refused to take a pay cut even though he is the highest paid player in the squad but sources have however told ESPN that the reports that came out last night weren’t accurate as they say that the German international has hesitated to accepting them since he would like clear communication from the club on how the funds will be used before he also joins his teammates on that decision.

The report claims that talks with Mesut Ozil are still ongoing and that he is however not happy that the negotiations have been rushed without consultations with experts and lawyers and it’s also said that the 31-year-old would even be willing to have a higher pay cut in the future. ESPN also adds that Mesut Ozil pays £2million every year as well as paying for the surgeries of more than 1000 children and that he is currently funding a new training facility for young players in his parents hometown in Turkey.

The majority of the Arsenal players have accepted the pay cuts and what is left is for the papers to be signed but it will be interesting to see if Mesut Ozil will also accept the pay cut or if he will stand firm on his decision.