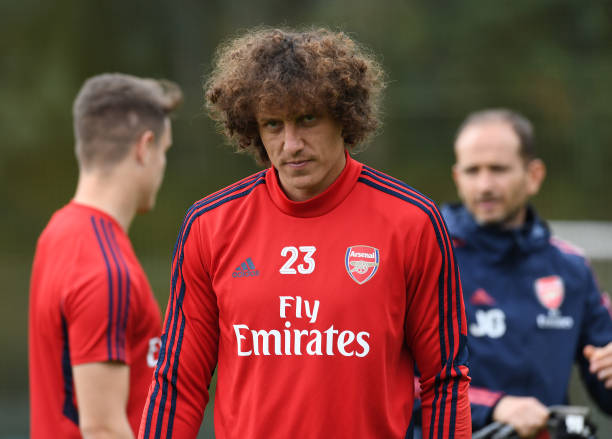 David Luiz  could be set to leave Arsenal after just one season at the Emirates stadium.

It was widely reported that Luiz arrived in north London on a two year deal, but it is revealed that the agreement was only for an initial 12 month stay.

No contract negotiations have been planned to extend the 33 year-old’s stay in north London with his current deal expiring on June 30.

David Luiz has been in fine form and is one of the players to have benefited from the appointment of Mikel Arteta.

Arteta has repeatedly sung praises to the Brazilian centre-back since replacing Unai Emery as head coach in December and is understood to be desperate to keep him, as is the Gunners’ technical director Edu.

The Gunners hierarchy might have had a change of heart regarding Luiz given his old age and the arrival of William Saliba from his loan spell.

Arteta is a huge fan of David Luiz

Central defence is still one of Arsenal’s problematic departments despite having up to seven players in that position.

Arsenal might instead permanently sign Pablo Mari and let go of the ageing defenders like Luiz and Sokratis as well as cash in on inconsistent one’s like Holding, Mavropanos and even Mustafi as well.

Luiz is keen to stay at Arsenal and has told friends he wants to remain in London. However earlier this month he gave a hint to where his future may lie, telling Brazilian television network Sport TV : “I always said that I would like to end my career at Benfica.

“I love Benfica. My dream is to step on the pitch of Estadio da Luz in their colours.”

David Luiz played for the Portuguese club between 2007 and 2011 before joining Chelsea.

Arsenal will be financially strapped this summer after last season’s spending spree that saw Arsenal spend up to £160m.

The club will therefore resort to signing youngsters, swap transfers and bargain deals that won’t cost very much.

Report: Premier League ease one new restriction and Arsenal’s Arteta will benefit from this!