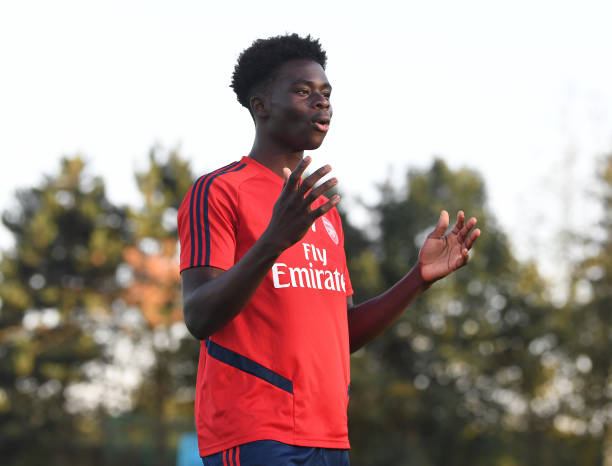 Bukayo Saka has been impressive for Arsenal this season as he has 10 assists and two goals so far and his recent form under Mikel Arteta has seen some European clubs try to make a move for him. The gunners reportedly gave him a new deal some time back but we haven’t been getting any update but the player himself has however made a huge hint over his future at the Emirates Stadium.

Bukayo Saka’s current contract at Arsenal will expire at the end of next season and this has scared many gooners because players running out their deals is something that they have witnessed for a long time but they have however been hopeful that the club will atleast make sure that a youngster signs a new deal. Saka has been linked to some exciting clubs such as Borussia Dortmund but a hint by the 18-year-old might have just shown that he has already signed a new deal with the gunners.

Bukayo Saka has today took to Instagram to post a picture of him in one of the Arsenal youth squad photo with the caption; “Kid with a dream…”

Although this could be a post that has nothing to do with contract talks but the club’s official account also made a hint that Saka has signed a new deal a week ago and so these two things could be connected with the club just waiting for the right time to make the announcement. The Arsenal fans have reacted happily about this post on Instagram because they believe that this is a big hint that he has put pen to paper to a new deal.

No doubt in my mind, the youngster has signed a new contract for our football club. ✌🏻 pic.twitter.com/Lm1NLfwnKw

Arsenal transfer target Willian speaks out on his future at Chelsea