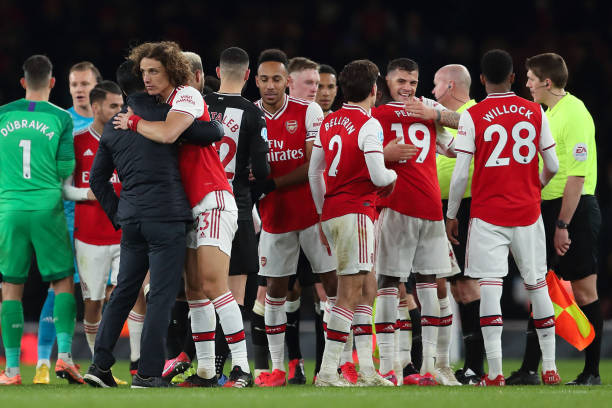 The Premier League is on course to return in a few weeks time after having been suspended for two months, “PROJECT RESTART” as its called will come with a number of new changes that might benefit some clubs including Arsenal. FIFA recently announced that it would allow clubs to be temporary using five substitutions in matches.

Most football leagues in Europe got suspended in March and the countries that have decided to continue their leagues will have to play a big number of matches in a short period hence the Football Governing body deciding to offer this option. Having five substitutions will be beneficial for managers as they will have options and we today take a look at three Arsenal players that will also benefit from this.

Matteo Guendouzi has not played much since Unai Emery left Arsenal in November but he could however get some chances to impress Mikel Arteta and break into the starting eleven when the league begins as having more subs on the bench will be allowing him to keep rotating his side to keep his main players fit for the next game since all matches will all be important in their quest for UCL football.

Guendouzi will then obviously be hoping to impress in the chances that he gets, be it from the bench or by being in the starting eleven when the bows decides to rotate his side to see the type of combinations that might work for him.

Ainsley Maitland-Niles was very impressive for Arsenal in the first matches of Arteta as the coach of the gunners but him showing his displeasure at playing in the right back position saw him routinely not get selected in the 18 man squad on matchdays. Maitland-Niles will however now probably be getting a chance to atleast start appearing on the bench so that it can be possible for the boss to consider giving him a chance.

Maitland-Niles wants play as a midfielder and since there was many ahead of him in that position, he would not make it to the 18 man squad but since the number has been extended by five then he will surely start appearing.

LONDON, ENGLAND – SEPTEMBER 24: Rob Holding of Arsenal during the Carabao Cup Third Round match between Arsenal and Nottingham Forest at Emirates Stadium on September 24, 2019 in London, England. (Photo by Stuart MacFarlane/Arsenal FC via Getty Images)

Rob Holding recovered from a knee injury last year but he has however failed to pick up form as he has failed to impress in most of the appearances that he has made this season. Holding has sometimes been told to play for the Under 23 squad since there isn’t space for him on the bench but he will also now benefit from this as he will be an available option for Mikel Arteta.

Report: Arsenal’s kits for 2020/21 season gets leaked and they are wonderful