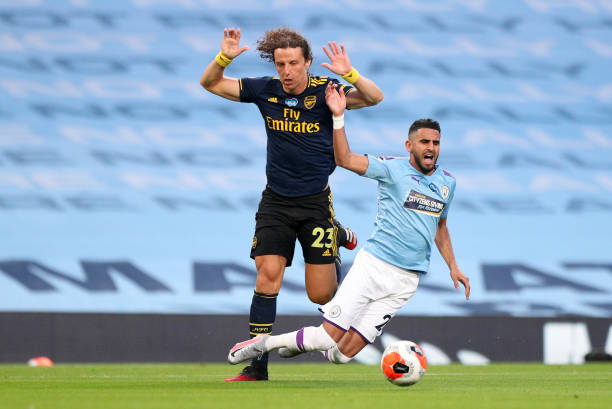 Arsenal faced Manchester City on Wednesday and David Luiz was not included in the starting as Mikel Arteta decided to go with new boy Pablo Mari and Shkodran Mustafi. Luiz however came in as a substitute and made some costly mistakes that saw Arsenal lose 3-0 to Manchester City. Luiz has sent a message to the Arsenal fans.

Arsenal started the match well against City as they were able to contain all the attacks by the home side but things went pretty bad for them when Pablo Mari got replaced by David Luiz after picking up an injury and the Brazilian centre back went on to fail to clear the ball hence Sterling getting to the ball and scoring past Bernd Leno just before halftime.

The first half ended 1-0 in favour of Manchester City but David Luiz was once again at fault as he not only gave away penalty but also got himself sent off in the same play. This saw the gunners reduced to 10 men and ended up losing 3-0. Luiz has opened up about this game and has sent a message to the Arsenal fans saying that he’s the one at fault for this loss and also spoke out on his contract situation.

“It was not the team’s fault. It was my fault. I should have taken a different decision in the last two months and I didn’t.” David Luiz told reporters after the game.

“I don’t want to use that [contract] as an excuse. That was my fault and that’s it. I love to be here, that’s why I continue to train hard, that’s why I came here today. I want to stay. The coach knows and he wants me to stay so we are waiting for the decisions.”

It is going to be interesting to see if Arsenal will still offer David Luiz a new contract before his current one expires because the mistakes that he made in this game cannot simply be forgotten when making a decision on whether to extend his deal at the Emirates Stadium.