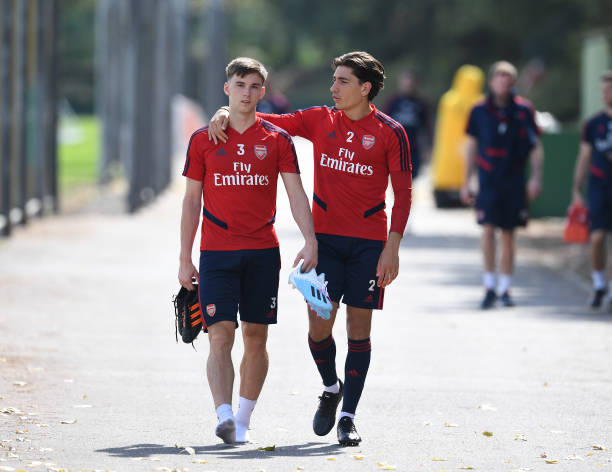 ( Bellerin and Tierney / Photo via Getty )

Arsenal will today face Manchester City away from home and the gunners will come into this game with confidence of getting all the three points as both teams will obviously not be at their expected levels. And so we take a look at the predicted Arsenal lineup to face City with all eyes on Kieran Tierney and Hector Bellerin.

Bernd Leno will of course be in between the goal posts as he is the first choice goalkeeper of the gunners and they will want him to be at his best as Manchester City are a very good side.

Arteta seemed to be happy with Mustafi before he got injured and so it is believed that the German international will go back straight into the starting eleven alongside David Luiz as they are both great on the ball. Tierney and Bellerin will start together for the first time this year and the gooners will be eager to see how they perform.

Granit Xhaka didn’t play in the friendly game against Brentford but it is believed that he is fully fit and so he will once again be paired with Dani Ceballos as Arteta was doing before the league got suspended.

Arteta has been adamant in his choice to start Aubameyang on the flanks and so him and Nicolas Pepe will provide the width in the lineup while Mesut Ozil plays as a central attacking midfielder to connect the midfield and attack.

Lacazette isn’t usually great away from home but Arteta might decide to still play him there as he’s more experienced than Nketiah in big matches.