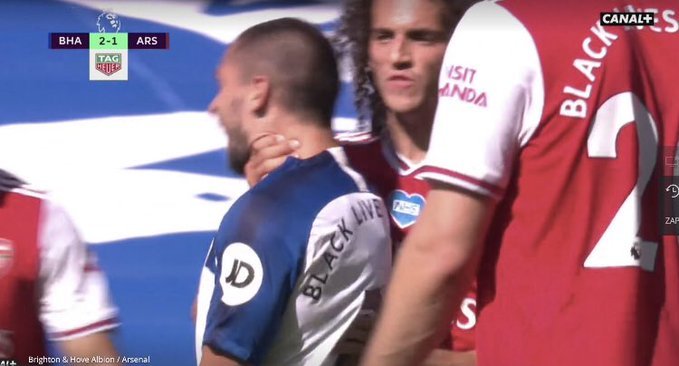 Arsenal seemed to be control of the game against Brighton but were however weakened in the first half as Bernd Leno went down in pain after Maupay seemed to have pushed him while he was jumping to get the ball, the German international was even seen pointing at Maupay as he was stretched off the pitch.

The gunners went ahead in the second half but Brighton & Hove Albion came back into the game and then Maupay confirmed all the three points went to his side by scoring a late winner. Maupay being the player that scored the winning goal made the Arsenal players especially Matteo Guendouzi angry as he is the one who injured Leno and the young Frenchman decided to slightly grab the throat of the Brighton forward at full time hence resulting into a big scuffle with many players of both sides.

There have been fears that Matteo Guendouzi will get banned for some games but Goal.com journalist Charles Watts has confirmed that the Arsenal midfielder will not face disciplinary action and that both Arsenal and Brighton & Hove Albion have been warned by the English FA. This will come as a big bonus for Mikel Arteta because the gunners have many injury problems at the moment and so losing one other midfielder would have been a big disaster.

Arsenal head coach was asked about this incident after the game on Saturday and this is what he had to say about it.

“I don’t know, I haven’t seen the action. I’ve seen a lot of players just talking and getting together but I don’t know what happened.” said Arteta.

“Yeah but it’s the frustration because we threw the game away and probably that’s a reaction that can happen. But I always believe a player has no intention to get somebody else injured.” added Arteta on the possible frustration of players with Maupay.