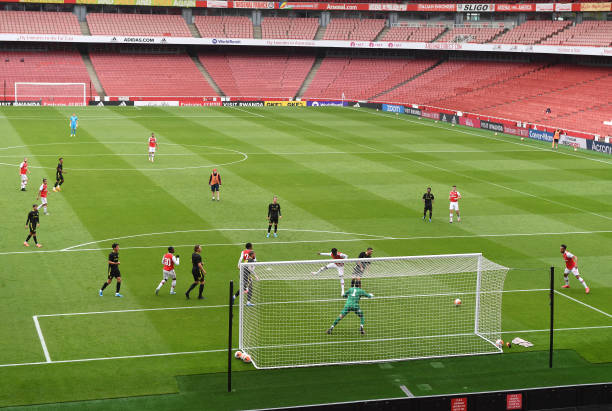 ( Arsenal Vs Brentford / Photo via Getty )

Arsenal welcomed Championship side Brentford at the Emirates Stadium on Wednesday as they prepared for the upcoming game against Manchester City. Many Arsenal players like Lacazette took part in this game to gain fitness ahead of the restart of the league and Arsenal fans have noticed the embarrassing thing he did.

Arsenal will play Manchester City on the first day of the Premier League after having been suspended for two months and so the club decided to hold two friendly games ahead of this match and the rest of the remaining games of the season. Arsenal won the first friendly game against Charlton Athletic and then this time lost 2-3 to Brentford at the Emirates Stadium.

Willock scored Arsenal’s first goal and Lacazette did score their second but the fans of the North Londoners did notice the embarrassing did that the Frenchman did which helped in them losing this friendly game. Lacazette receives on the ball near his own penalty box and then let’s it slip away from him hence Brentford scoring.

The Arsenal fans have reacted about this on the social media platforms saying that Lacazette is always guilty of losing possession in his own half in even some competitive matches while others said that they were glad that this was just a friendly game and not a competitive game that would have cost them a lot.

Video: Arsenal release footage of their thrashing of Championship side as they prepare for PL start