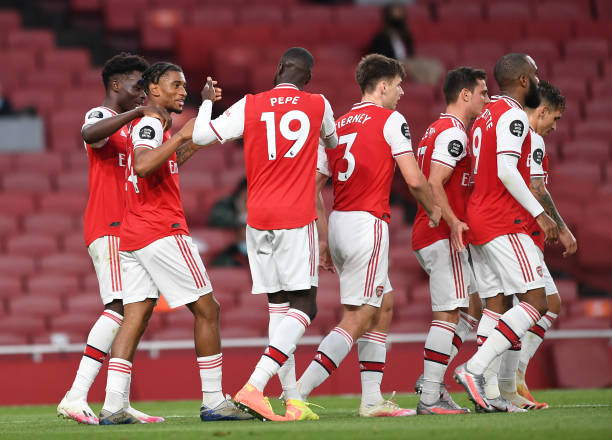 Arsenal have today beaten the Premier League champions Liverpool 2-1 at the Emirates Stadium and this is a huge win for the North Londoners as this means that they are still in the race for a UEFA Europa League spot. Goals from Alexandre Lacazette and Reiss Nelson were enough to give Arsenal their first win over Liverpool since 2015.

The gunners came into this match well knowing how they will have to defend for a good amount of the game since Liverpool are good at punishing clubs that open up. Arsenal looked nervous in the first few minutes of the game while Liverpool were attacking each and every minute but it still took 20 minutes for something to happen.

Liverpool went ahead in the 20th minute after Sadio Mane ran from the midfield to finish off a cross and this scared many Arsenal fans as many believed that this would be another thrashing for the gunners since their matches against Liverpool always consist of many goals. The gunners went back into the game in the 32nd minute after Reiss Nelson pressed Virgil Van Dijk who then ended up losing the ball to Lacazette who then equalised for the gunners after rounding up Alison.

LONDON, ENGLAND – JULY 15: Alexandre Lacazette rounds Alisson of Liverpool to score Arsenal’s 1st goal during the Premier League match between Arsenal FC and Liverpool FC at Emirates Stadium on July 15, 2020 in London, England. Football Stadiums around Europe remain empty due to the Coronavirus Pandemic as Government social distancing laws prohibit fans inside venues resulting in all fixtures being played behind closed doors. (Photo by David Price/Arsenal FC via Getty Images)

Just 12 minutes later, Arsenal was given another absolute gift by Alison as he made a poor pass towards Lacazette and the striker sent a wonderful cross to Reiss Nelson who then put the ball into the back of the net to make it 2-1 for the home side. The first ended up 2-1 in favour of Arsenal despite Liverpool’s persistence.

Arsenal didn’t make any substitutes at the start of the second half but they however retreated back towards their penalty box to defend their lead and it worked as Liverpool put them under pressure for the next 45 minutes with no success. The gunners did later bring in players such as Aubameyang, Willock and Ceballos but they however weren’t also brought in to attack but to help in the defence and they all three did a fabulous job as they helped in stopping many attacks.

Klopp replaced Salah and Firmino with Origi and Keita but they however too failed to find a breakthrough. Ainsley Maitland-Niles was also brought in for Cedric Soares since Sadio Mane was threatening via that flank for a while and the gunners managed to hold on to their lead thanks to great saves from Emiliano Martinez and their well organized defence.

Arsenal 2-0 Manchester City: Aubameyang the hero for the gunners