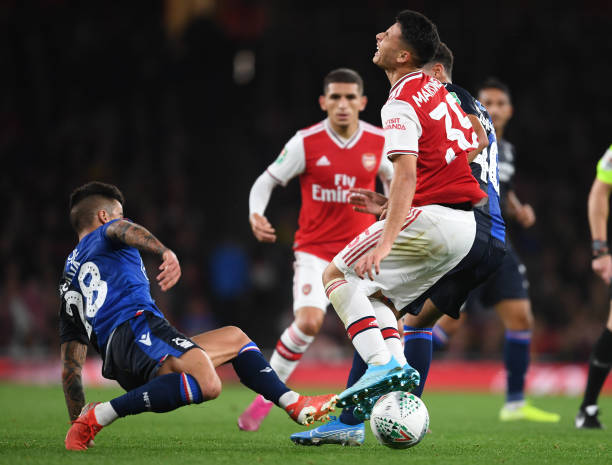 Arsenal youngster Gabriel Martinelli did not manage to play even a single minute since the Premier League restarted as he got injured while the gunners were preparing for their game against Southampton. Martinelli got a knee injury after a tackle from a teammate and the club has provided some information on his possible return date.

Arsenal youngster Gabriel Martinelli who has this season scored ten goals is out for the season and it must have been very frustrating for him as he was having a great first year in English football. Arsenal have released an update on his injury, saying that he is been coming to the training ground everyday in a knee brace to receive specialist attention and support from the medical team.

Arsenal says that Gabriel Martinelli had a successful operation and that his recovery progress is going to take months and so he is expected to come back at the start of next year (2021).

Arsenal centre back Pablo Mari arrived at the club in the January transfer window and he however got injured in the first game against Manchester City post COVID-19 and the club had earlier communicated that he would be out for about three to four months. This new update from the Arsenal medical team says that he is now off crutches and moving freely with no support and that the club has allowed him to go to his home country Spain for a short period.

The club has confirmed that he will continue receive specialist attention and extensive therapy in Spain but that he will return to UK in a few weeks time to resume his rehabilitation at the Arsenal training complex. Pablo Mari will be expected to return to full training in September.