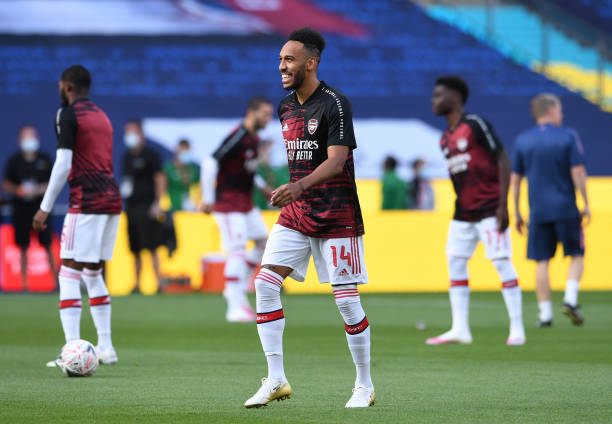 Pierre-Emerick Aubameyang has been Arsenal’s best player in the last three years and the gunners are however in fear of losing him in this summer transfer window since he is yet to agree to a new deal with the North London club. The Arsenal fans have today received a good update on Aubameyang’s future.

Aubameyang arrived at Arsenal in the 2018 winter transfer window and he then went on to become one of the Premier League top scorer in his first full season and has also been impressive in this recently concluded campaign as he scored 22 goals, just one less goal than Vardy who won the golden boot. Aubameyang has avoided publicly talking about his future but latest reports have provided a good update for the Arsenal fans who are eager to know if the Gabon international will be at the club next season.

The Athletic has today reported that Pierre-Emerick Aubameyang is happy at Arsenal and that he is however yet to make a decision on whether to extend his deal at the Emirates Stadium but that he would however not break the hearts of the fans as others did in the past by going to a direct rival in the league. The report claims that Aubameyang would move outside of England to clubs such as Inter Milan or Barcelona and that he currently has no complaints about playing as a winger in Mikel Arteta’s style as there were fears that he might prefer playing as a centre forward.

Arsenal’s head of football Raul Sanllehi will be personally handling the talks as per the source and so the fans will be hopeful that the 31 year old extends his stay at the Emirates Stadium as they will need him in their rebuilding period. The gunners will face Chelsea at the weekend in the Emirates FA Cup final at the weekend and the gooners will be hopeful that winning the trophy and qualifying for Europe will be enough to convince Aubameyang to stay at the club.

Report: Mikel Arteta selects five players to be put on the transfer list for the summer transfer window

Report: Arsenal find a breakthrough in their hopes of keeping Dani Ceballos