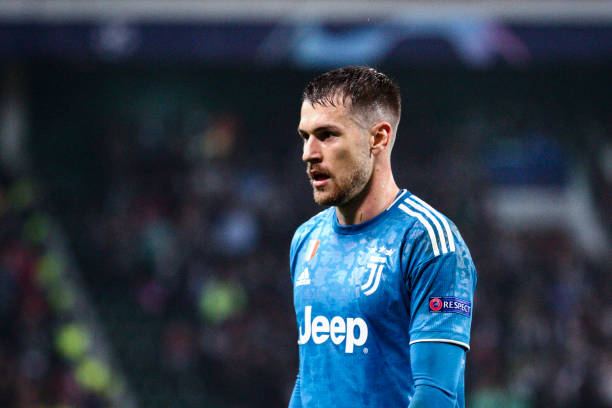 Aaron Ramsey who was a fan favourite at Arsenal finally waved goodbye to the gooners last year after a decade of service that saw him become an influential player in them winning three FA Cup titles. The Arsenal team and fans have missed Ramsey this season and now reports from France are reporting that there’s a chance that the gunners might get him back in a swap deal.

Aaron Ramsey has not played a lot of minutes for Juventus this season as he is a player that does not suit the system of Maurizio Sarri and this has seen the player get linked with a move away from the Serie A leaders as its believed that they will try to bring in new midfielders in the upcoming summer transfer window. So how can Arsenal get Aaron Ramsey when they don’t have enough funds to get their main targets. The answer is Lacazette.

ST ALBANS, ENGLAND – MAY 26: Alex Lacazette of Arsenal during a training session at London Colney on May 26, 2020 in St Albans, England. (Photo by Stuart MacFarlane/Arsenal FC via Getty Images)

Surprisingly, Juventus have shown interest and are in contact with Arsenal striker Alexandre Lacazette according to L’Equipe and it’s even claimed that the Serie A giants will want to discuss with the gunners about a possible swap deal since most clubs have taken financial hits due to the Coronavirus making clubs to lose matchday revenue. Even though the report didn’t specifically mention that the gunners would request for Ramsey in the swap deal, most reports from Italy claim that the Welshman will either be sold or loaned and so it would make sense for him to return to the club that was his home for more than 10 years.

It’s been quite clear that Arsenal have missed a player like Aaron Ramsey this season as none of their midfielders has reached five goals this season and with Ozil now nolonger playing, the 29 year old would be a great addition for Mikel Arteta as he would allow him to start using his favourite 4-3-3 formation.