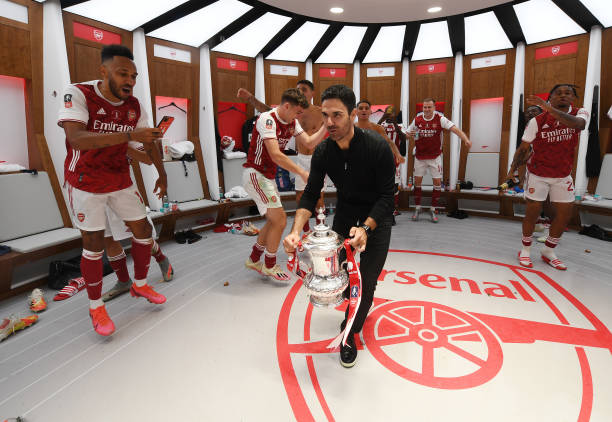 Arsenal appointed Mikel Arteta as their head coach in December last year and he has finally finished his first season even though he arrived midway through it. The gunners ended the 2019/20 season on a high note thanks to winning the FA Cup trophy and Arsenal legend Lee Dixon has spoken on why he believes in him.

Mikel Arteta arrived at Arsenal when the gunners looked to be in free fall after their experiment with Freddie Ljungberg had failed and the Spanish boss also had a tough first start as he drew and lost in his first two matches at the club but he however recovered from that and went on a good run of games, but the unexpected happened when the Coronavirus put a stop on all major European football leagues.

The gunners lost their first two matches when the Premier League restarted but Mikel Arteta adapted and then went on to win seven of their next eleven matches including a final that saw them become 2020 FA Cup champions. Arsenal legend Lee Dixon who played for the North Londoners from 1988 to 2002 claims that the achievement of winning a trophy and going to Europe with the current Arsenal team shows that they will keep raising a level under Mikel Arteta.

“The achievement he (Arteta) and has done this season to win a trophy and get into Europe, he’s absolutely knocked the lights out with the group of players he’s got in my opinion. So now its like we go to the next level and the next level.” Lee Dixon said on the Handbrake Off podcast.

Most of the Arsenal supporters will agree with the assessment from their legend Lee Dixon as they also believe Mikel Arteta is the right man to take them to the next level and that he needs to be fully backed by the board.