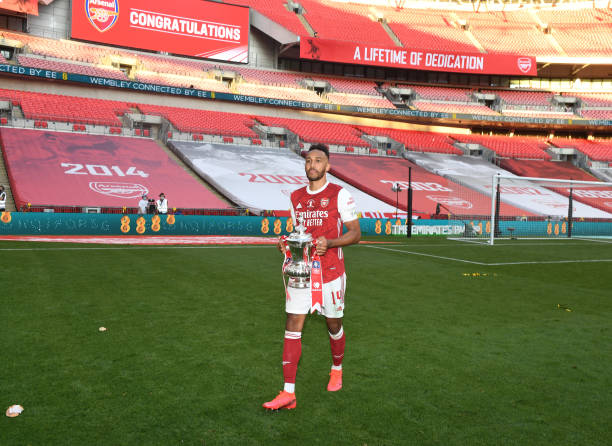 Arsenal have since last year been trying to tie down Pierre-Emerick Aubameyang to a new deal and the fans have since the winning of the Emirates FA Cup been hoping to hear some good news on this situation and it looks like their wishes might come true as its now reported that they have made a breakthrough.

The gunners signed Aubameyang in the 2018 summer transfer window and he has turned out to be one of the best decisions that they’ve made in the last 10 years as the Gabon international has scored seventy goals in just the three years he has been at the Emirates Stadium. It’s also worth putting in consideration that the gunners have struggled in the last few years in creating chances but Aubameyang has kept scoring goals every week.

A report by the Telegraph has today confirmed that Pierre-Emerick Aubameyang is going to sign a new three-year deal and that the club and the player have reached a verbal agreement, and that what is left will be for the representatives of the 31 year old to go through the new contract and then he will put pen to paper and commit his future to the North Londoners. Aubameyang agreeing a new deal with Arsenal will be so huge for the fans and Arteta who has already said many times that he wants his captain and striker to stay at the club.

Pierre-Emerick Aubameyang was very influential for Arsenal in another season and he this time even won them a trophy as he scored four goals in the Emirates FA Cup semi finals and the final and the fans will be hoping that him staying at the club would be the start of something special. The new deal of Aubameyang will see him stay at the club until 2023 and this will probably be the end of transfer speculations over his future because clubs were hoping to get him on the cheap since he would have less than a year on his deal.