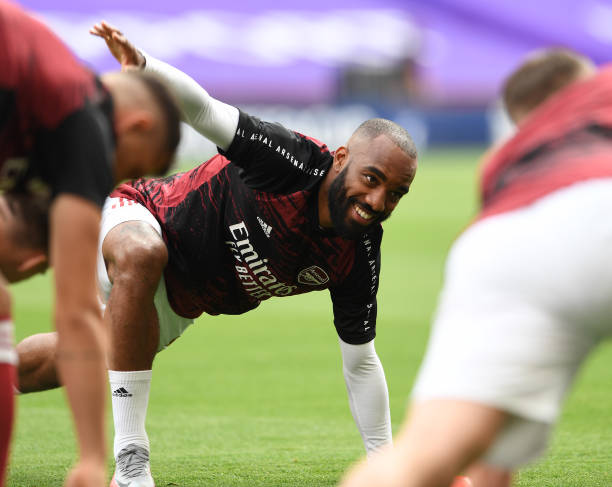 Arsenal striker Alexandre Lacazette was in the starting eleven that played against Chelsea in the Emirates FA Cup final and even though he didn’t get on the score sheet, he was however very influential in the game as he was great at linking up attack and was also doing good defensive work.

The Arsenal players celebrated a lot after the final whistle and after some dressing room celebrations then also took to social media to show their excitement and the Frenchman then mocked his fellow country mate Olivier Giroud via social media. Lacazette arrived at Arsenal in 2017 and played with Giroud for just six months as the 33 year old moved to Chelsea in the 2018 January transfer window.

Giroud assisted Pulisic’s opening goal in the FA Cup final but he was however later withdrawn and the gunners ended up winning the whole thing. Lacazette shared a picture showing a disappointed Giroud with laughing emojis and the Arsenal fans absolutely loved this as they believe it was great revenge for what he said after the UEFA Europa League final in Baku last season.

Olivier Giroud made the Arsenal fans angry last year when he scored against them in the final and then went on to be recorded mocking the gunners while he was in their team bus and so this simple mocking image from Alexandre Lacazette has been hugely embraced by the fanbase of the North Londoners on social media.

Arsenal already have Matteo Guendouzi’s replacement within their ranks