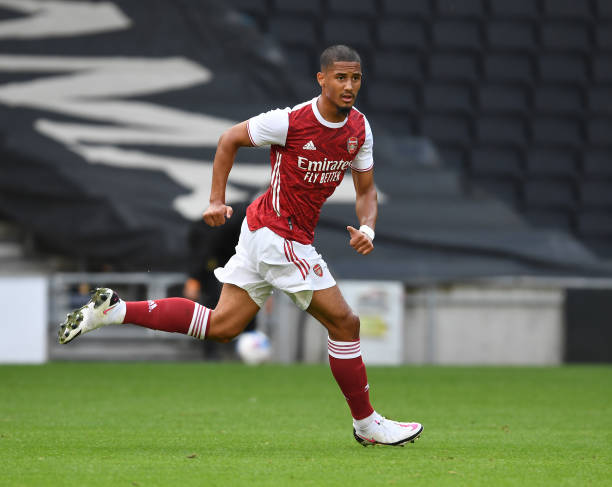 Arsenal signed William Saliba from Saint-Etienne in the 2019 summer transfer window and decided to loan him out for the rest of the 2019/20 campaign so that he could get more minutes and gain experience. After the end of the 2019/20 campaign, Saliba returned to the North London club ahead of the start of the season.

Arsenal started their preparations for the upcoming 2020/21 season and William Saliba was included in the squad that faced League One side MK Dons and they thrashed them 4-1 thanks to goals from Mohamed Elneny, Eddie Nketiah, 𝘔𝘤𝘎𝘶𝘪𝘯𝘯𝘦𝘴𝘴 and Reiss Nelson. We take a look at things that gave Arsenal fans hope of expecting next season with Saliba in the few minutes that he played in that game.

HIS COMPOSURE ON THE BALL IS TOP CLASS

One of the reasons that Arsenal wanted to bring William Saliba is because he had a lot of potential to become one of the best defenders as he can do exactly what you want from a modern centre back. He was very calm in this game as he didn’t feel so much nervousness during the game but rather focused on his role and was very attentive and the composed whenever MK Dons tried to do some pressing.

HE WILL BE PERFECT FOR ARTETA IN THE PROGRESSIVE PLAYS

Arsenal head coach Mikel Arteta has talked a lot about the progressive plays as he wants even his centre backs to always to quickly progress the ball forward and William Saliba will fit well in this type of system as he is very quick to pick up passes which is very important in the Premier League as most clubs aren’t given the privilege of having the ball on your feet for many seconds.

It is still not known whether he will be in the starting eleven that faces Liverpool in the Community Shield but the Arsenal fans will absolutely hope that he is given the chance as they are so eager to see him playing for them in a competitive game.

Thomas Partey is the key to top four return