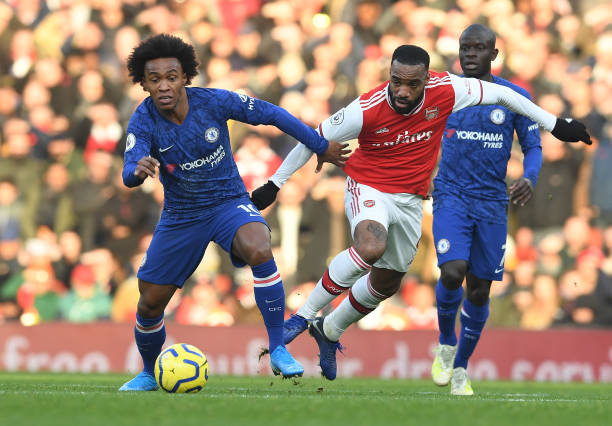 Arsenal are close to agreeing a deal to bring Willian to the Emirates stadium from Chelsea according to various reports.

But what would his arrival mean for Bukayo Saka and Gabriel Martinelli?

Willian Borges is a winger known for his dribbling, pace, direct free-kicks and immense workrate.

The 31 year old Brazilian can play on either of the wings and can also play through the middle as an attacking midfielder.

Signing Willian might affect or reduce the playing time and growth of Arsenal’s exciting wonder kids Martinelli and Saka.

Arsenal’s two rising stars both primarily play on the left wing, this is the same position we anticipate Willian to play on. It would be hard to displace Nicolas Pepe on the right side, Arsenal’s most expensive purchase ever will definitely not be warming the bench next season.

The good thing is Martinelli is able to play as a centre-forward or striker and has been deployed in that position many times this season and has shown that he is capable of playing both positions with ease.

Martinelli can play on the left wing or as a striker

The Brazilian sensation stepped up for Arsenal in the Premier League during Aubameyang’s absence. Unfortunately he picked up an injury that will see him sidelined until later on in the year or early next year.

Meanwhile Bukayo Saka has played as many as 5 positions in his breakthrough season and has excelled in all, the 18 year old has played as a left winger, left back, right winger as well as a central midfielder.

Bukayo Saka’s impressive form got him rewarded with the number 7 shirt which means he is likely to be a regular in the first team.

Saka has been a utility player for Arsenal and was rewarded with shirt no.7 and a new contract

Willian signing for Arsenal could also mean that Lacazette is on his way out. Perhaps the club could decide to cash in on the Frenchman and shift Aubameyang to his favoured position, freeing up the left side for Willian.

However, Arsenal will need squad depth and many options for the new season because the 2020/21 season will be action packed. Factors such as suspensions, fatigue and injuries are inevitable thus a large squad would cater for these issues.

Arsenal will be involved in up to 4 competitions including the Europa League which they qualified for after winning the FA cup and will be looking to finally win the competition after failing in previous attempts.

Arsenal’s main target for the upcoming season will be finishing in the top four and finally returning to the Champions League after nearly four seasons.

Report: How Arsenal performed in the four competitions in the 2019/20 season