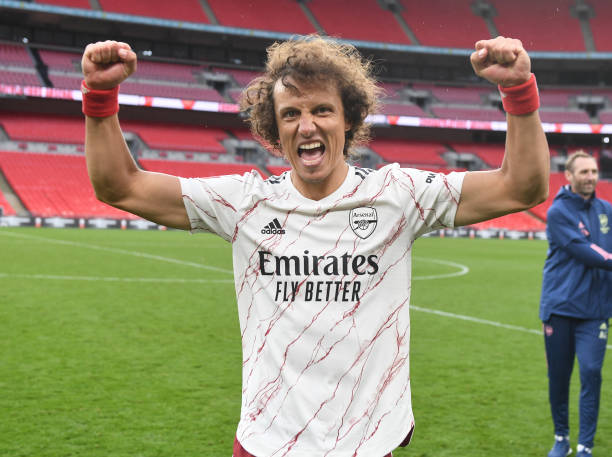 Arsenal will on Saturday face Fulham at the Craven Cottage stadium and Mikel Arteta will come into this game with his main aim being to get all the three points but he will however have some players that won’t be available for selection. Here are four players that will miss Arsenal’s game against Fulham.

Arsenal defender David Luiz took part in Arsenal’s FA Community Shield win over Liverpool some time back but its been claimed that he will be out for some time due to an injury he sustained in training as it’s now believed that Saliba will take his place in the squad as he would have played against Fulham. Arsenal head coach Mikel Arteta will obviously be unhappy that he won’t be available as the centre back is one of his well trusted players that usually starts most matches.

Luiz’s injury is yet to be confirmed by the club but it will definitely be one of the things discussed tomorrow in the pre-match press conference of Mikel Arteta.

Arsenal youngster Gabriel Martinelli has spent months without playing for the gunners due to an injury that he sustained in training post lock down. Martinelli’s left knee injury will see him miss the start of this season and the most recent team news from the club confirmed that he was expected to make his return to the squad at the end of this year.

Pablo Mari has also been on the sidelines for months as he got injured in the first match played postlockdown and he has since then never featured for the North Londoners. The ankle injury has seen him miss a lot of action but it’s believed that he will make a return this month as per the club but what’s for sure is that he will not take part in the first Premier League game against Fulham.

Shkodran Mustafi hasn’t played for Arsenal since he got injured in the FA Cup semi final game against Manchester City and he is yet to start full training with the rest of his teammates, and so he will miss the game against Fulham.

Report: Arsenal confirms the six players that will miss their encounter with West Ham United