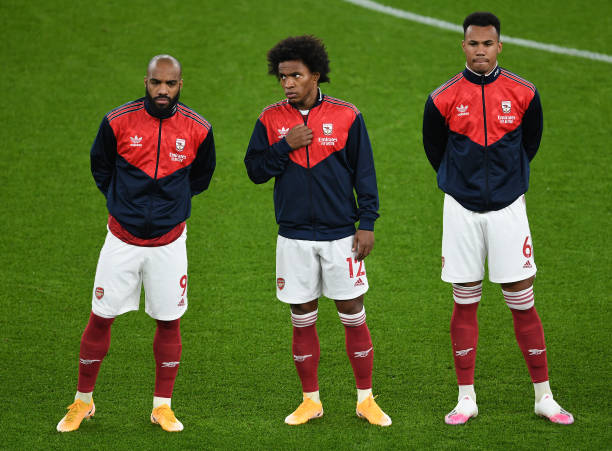 Arsenal will on Tuesday be welcomed to the Falmer Stadium by Brighton and Hove Albion but Mikel Arteta will however have to try to get a win without four senior players as the latest team news from the North London club has been released. The gunners come into this match after an emphatic win over Chelsea and they will want to go on a run of wins starting with the Brighton game.

Gabriel Magalhaes was not in the Arsenal squad that ended their winless run as he had been urged to isolate due to having made contact with someone who had COVID-19. The club has now today confirmed that he will miss their next few games as latest results have confirmed that he indeed contracted COVID-19.

The gunners will surely miss him as he has been one of their best players this season. It looks like Arsenal fans will only be able to see him in Arsenal colours again next year.

MANCHESTER, ENGLAND – NOVEMBER 01: Thomas Partey of Arsenal during the Premier League match between Manchester United and Arsenal at Old Trafford on November 01, 2020 in Manchester, England. Sporting stadiums around the UK remain under strict restrictions due to the Coronavirus Pandemic as Government social distancing laws prohibit fans inside venues resulting in games being played behind closed doors. (Photo by David Price/Arsenal FC via Getty Images)

Thomas Partey has been injured for a long time since he came off during the North London Derby and the gunners are anxiously waiting for his return as they believe they wouldn’t be in such bad form if he was fully fit and playing. The club has in today’s latest team news confirmed that Thomas Partey has begun training outside and that their team of experts are closely monitoring his situation.

David Luiz and Willian were not in the Arsenal squad that beat Chelsea at the Emirates Stadium on boxing day due to feeling unwell and it’s now been confirmed by the North London club that they have both started outside training, and that they would rejoin the squad on 31st of this month.

It will be interesting to see if Willian will quickly go back into the squad as the youngsters such as Saka and Martinelli showed a few days ago that they can challenge him for a spot in the starting eleven.